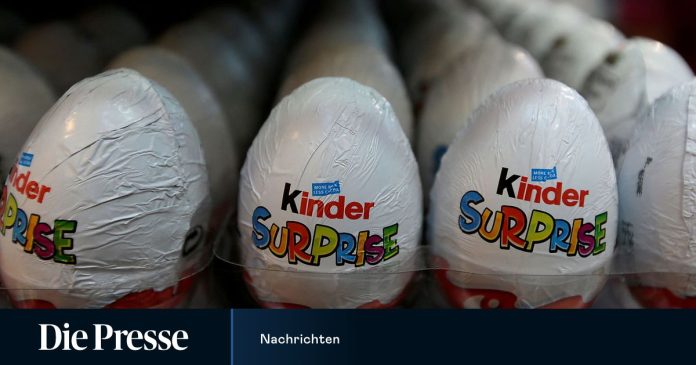 Also in Austria, select batches of baby products are being recalled as a precaution and removed from supermarket shelves.

It can hardly get any worse for sweets manufacturers: salmonella, plant shutdowns – and all this a week before Easter. Ferrero had been aware of a problem at a Belgian factory for months. But now the authorities have withdrawn the emergency brake and revoked the license. The grievances seem to have been known for months. The Common Good Common Foundation said in a Saturday broadcast that it is studying legal steps.

Also in Austria, select batches of baby products are being pulled or removed from supermarket shelves as a precaution. A detailed list of affected products can be found on the AGES website. The Common Good Foundation Comun, with two citizen initiatives oekoreich and Lieferkettengesetz, is now calling for legal consequences: “It cannot be that a supposedly multi-billion dollar company has been hiding a serious problem for months and get away with it. This case demonstrates why there must finally be options for liability. We Now we are looking at legal action against the group, even if we aren’t very optimistic,” said Veronica Boehrn-Mina, spokeswoman for the Citizens Initiative for Supply Chain Law and president of the association. Comun Foundation for the Public Good. She stated that current laws are too weak to protect consumers from corporate machinations. “Ferrero is not a blank slate here either. Companies like this make billions of dollars in profits, but they take no responsibility for their misdeeds. This must end now,” Bohren Mina demanded.

Zadak is planning a round table on supply chain law

She said on the radio broadcast that if the legal examination, to which a famous lawyer was assigned, came to the conclusion that there were no possibilities for legal action, then a similar change in the law would be sought. The Foundation for the Public Welfare is already in touch with Minister of Justice Alma Zadek (the Greens) and will organize a roundtable on supply chain law in May as part of the Austrian Consumer Dialogues.

As early as December 15, Ferrero learned of a case of salmonella at the plant in Arlon, Belgium, according to a statement from Ferrero France in Luxembourg. Accordingly, salmonella was found there in a sieve at the exit of two tanks for raw materials. Then the products made from it were discontinued. Ferrero said the filter has been replaced and controls increased on unfinished and finished products.

Production has stopped at the moment

The investigations by the food authorities, which had begun in the meantime, on Friday finally reached their initial climax. The confectionery giant has to stop production at the factory in Belgium, which has been in the spotlight for days, for now. The Afsca supervisory authority has announced that it will revoke the production license for the plant as a result of the investigations. According to the statement, Ferrero did not provide enough information in the investigation. In the midst of important Easter activity, Ferrero now has to withdraw all products from the factory, regardless of their production date.

According to the Afsca announcement, all Kinder Surprise, Kinder Mini Eggs, Kinder Surprise Maxi and Schoko-Bons made in Arlon were all affected. The Kinder Mix Easter Gift Bag, which was presented in some German test stores, is also affected by the product recall. Afsca has also asked all distributors to withdraw affected products from retail outlets. The Arlon factory may only reopen after all food safety rules and requirements have been met.

On Friday afternoon, Ferrero spoke again and admitted mistakes in handling some product recalls. The Italian company remains ambiguous about the reasons for the month-long gap between the discovery of the Salmonella case in Arlon and the recalls in April: “internal inefficiencies” ensured that “delays occurred in recoveries and in the exchange of information”. Therefore, investigations into the case were not conducted as quickly and effectively as necessary, the statement said.

Since the beginning of the week, the company has been recalling products from its children’s candy line in a number of countries after reports of several cases of salmonella being linked to Arlon factory products. The company initially emphasized that the recalls were purely precautionary measures.