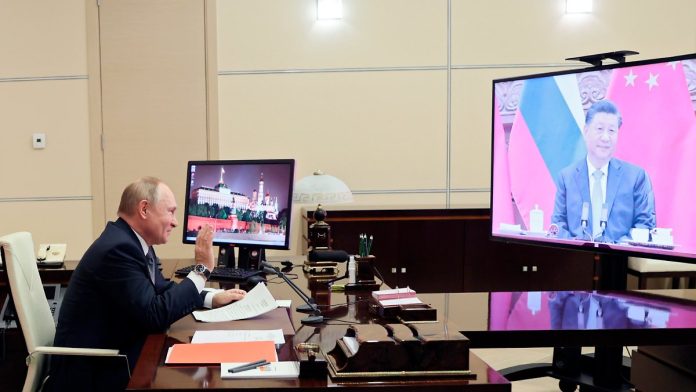 In the Ukraine crisis, Russia insists on concessions from the West. With Chinese President Xi, President Putin is now gaining an influential backer for his claims. Both countries see international law as being “trodden”.

According to his presidential office, Russian President Vladimir Putin has secured China’s support for his demand for binding security guarantees from the West. Yury Ushakov, a representative of the Presidential Office in Moscow, confirmed that Chinese President Xi Jinping confirmed this to Putin in a video conference.

Putin previously informed Xi about his recent conversation with US President Joe Biden. Xi assured Putin that he understands his concerns and supports the Russian initiative. Xi himself said, according to Chinese state media, the two countries should protect each other’s security interests. Xi had told Putin that “certain international powers” were interfering in the internal affairs of China and Russia under the guise of democracy. These forces will trample on international law and the recognized norms of international relations.

Russia wants the United States and NATO to ensure that the Western military alliance does not expand eastward or deploy certain weapons systems in Ukraine and other countries bordering Russia. The Russian presidential office announced that Deputy Foreign Minister Karen Donfried made concrete proposals for binding security guarantees in Moscow on Wednesday. Donfred had traveled to Moscow amid the rising tensions between East and West in the Ukraine crisis.

Ukraine has been striving for NATO membership for some time. The country has already received US military aid in the conflict with its neighbor Russia. The Russian leadership argues that NATO’s eastward expansion threatens Russia and contradicts the assurances NATO made in 1991 when the Soviet Union collapsed.

According to NATO, their own activities are purely defensive in nature and serve to deter any new Russian aggression. The government in Kiev feared an attack by the Russian army, which, according to Ukrainian sources, had mobilized about 100 thousand soldiers to prepare for them near the border.

The President of the European Union Commission, Ursula von der Leyen, has threatened Russia with unprecedented and dangerous consequences if the conflict in Ukraine intensifies. Speaking at the EU Parliament in Strasbourg, a day before the EU summit, she said the EU could respond to any further aggression by tightening or expanding existing sanctions.

Protasevic’s girlfriend is apparently threatened with legal action in Belarus