Home Tech Mars and Earth: The source of building materials for the inner planets 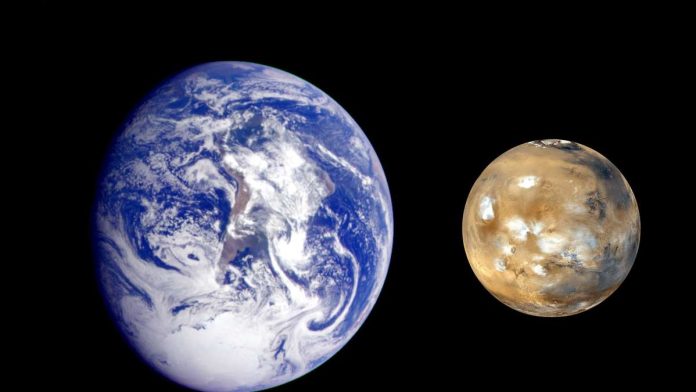 To find out where Mars and Earth’s building materials come from, a research team is examining meteorites — and making a surprising discovery.

Monster – How did the planets Mars and Earth originate? There are two popular theories about this. One assumes that the planets formed from dust that orbited the sun about 4.6 billion years ago after the birth of our solar system. Over time, the dust clumps together to form larger and larger clumps, which at one time were the size of our moon. The rocky inner planets of our solar system – Mercury, Venus, Earth and Mars – emerged from the collision of these bodies.

Another theory holds that the building materials for the inner planets come from a different direction: from the outer solar system. According to this, small clumps of dust from the outer solar system collided with the larger ones that had already formed on their way towards the sun, accumulated there and let them grow to their current size. Each of these theories arose from computer simulations and model calculations – but which one is correct? Where did the building materials come from that Earth and Mars was made? Researchers at Westfälische Wilhelms-Universität (WWU) Münster, Observatoire de la Côte d’Azur (Nice, France), Caltech (Pasadena, USA), Museum Faure Naturkunde (Berlin) and the Free University of Berlin are busy and have found an answer to that Published in “Science Advances” Will be.

Where do building materials for Mars and Earth come from?

First author Christoph Burckhardt explains in a book Contact from the University of Münster. To this end, the international research team dealt with isotopes of rare metals such as titanium, zirconium and molybdenum. These minerals can be found in small traces in the outer layers of Earth and Mars. The underlying assumption is that these and other metallic isotopes were unevenly distributed in the early solar system. The determining factor for the frequency of the mineral was the distance from the Sun, which is why the researchers hypothesized that the frequency of the minerals provides information about where a planet’s building material originated in the early Solar System.

But how did researchers know which “building materials” were found in the inner and outer solar system? As a reference, they used meteorites, a substance that has largely remained unchanged since the beginnings of our solar system. They were helped by two different types of meteorites:

According to experts, the composition of the Earth’s outer rock layers and the two types of meteorites have already been researched. To determine the occurrence of titanium, zirconium, and molybdenum on Mars, they examined samples from 17 meteorites on Mars. In computer simulations, they find that the outer rock layers of Earth and Mars have little in common with carbonaceous chondrites from the outer solar system.

Their share of original building materials from Earth and Mars is only about four percent. Professor Dr. confirms. Thorsten Kleine from the University of Münster. “We cannot confirm this theory of inner planet formation.”

An unknown substance participated in the formation of Mars and Earth

But the research team made another observation during the investigation: Even non-carbonaceous chondrites from the inner Solar System don’t quite match the composition of Mars and Earth. Apparently, other unknown building materials were involved in the formation of the planets. The origin of this third type of building material must be in the deepest part of the solar system. This can be inferred from the isotopic composition, which our calculations indicate,” explains Christoph Burckhardt. It is about “missing building materials” from close proximity to the Sun, which are almost completely absorbed by the inner planets and therefore no longer appear in meteorites, Klein explains. You no longer have access Direct to articles today.

What is happening in astronomy and space travel? Subscribe to our free survival newsletter.

Although the latest discovery surprised experts, they came up with a clear answer to the question about the source of building materials for planets, Earth and Mars: Christoph Burckhardt explains:

Jupiter may have played a role in this development, Burckhardt believes regarding the Space.com portal. “There is no doubt that Jupiter, as the ‘king of the planets’, had an influence on what happened in the inner solar system.” In fact, the gas giant planet could make up a large portion of the dust and stones that drifted towards the sun itself. Burkhardt believes that “without Jupiter we could sit on a super-Earth or the small planet Neptune today”. (tab)

Researchers recently discovered how Mars formed on the inside and what it looks like beneath the surface of Mars.