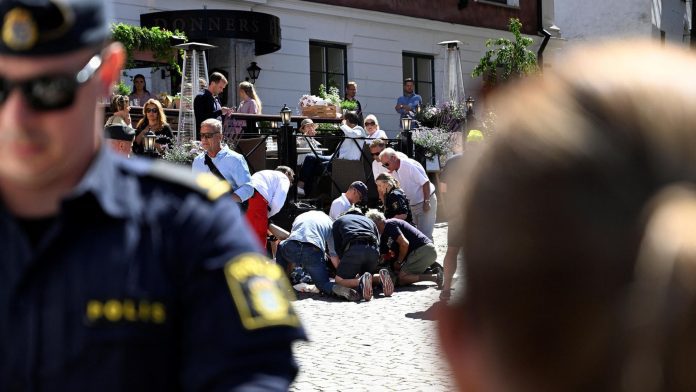 Investigations in Sweden: stabbing a woman and arresting a suspect.

A woman has been killed in a knife attack on the Swedish Baltic island of Gotland, where a meeting of the country’s leaders is being held. As the Swedish police announced, on Wednesday, the 60-year-old woman was stabbed at lunchtime in the city of Visby.

“I regret to inform you that a woman has died from her injuries,” Jutland Police Chief Fredrik Pearson said. A 33-year-old man was arrested shortly after the incident. The police chief declined to comment on the perpetrator’s possible motive.

Links to a neo-Nazi group?

However, police assumed the attack had nothing to do with Almedalen Week – the annual meeting in Visby in early July for Sweden’s political and business leaders.

Expressen reported that the suspect allegedly had links to the neo-Nazi group NMR, which was not initially confirmed by investigators. Police Chief Pearson said a number of questions have arisen. After all, the attack took place in the middle of the day in the city center on a well-known square, where a lot of people were at that time.

Turkey wants a different label: from “Turkey” to “Turkey”