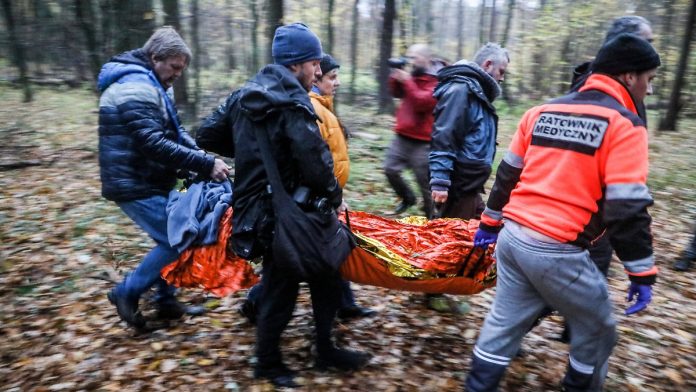 The Seebrücke initiative is known as the refugee rescue in the Mediterranean. Activists now want to help migrants stranded in the border area between Poland and Belarus and bring them to Germany on the bus. The Ministry of Interior advises that such action is a criminal offence.

Activists from Germany want to take migrants and refugees from Poland to Germany by bus next week. A bus from the Seebrücke Deutschland and LeaveNoOneBehind initiatives will provide relief supplies to refugees near the Polish-Belarus border on Monday, according to the organizers.

“Unauthorized transfer and any unauthorized entry could result in criminal prosecution,” said department spokesman Steve Alter, when asked if activists could rely on a permit. “Announcing such a measure does not change that,” he said. In addition, there are no considerations for the admission program for people from Belarus. The federal government is also interested in observing the Dublin Rules, which specify which EU member state a person seeking protection must apply for asylum.

In response to EU sanctions, Belarus Governor Alexander Lukashenko announced in the spring that he would not stop migrants from heading to the EU. The European Union accuses him of smuggling people from crisis areas. Poland, Lithuania and Latvia are strengthening their external borders with Belarus. However, many of them have now arrived in Germany. In October, the Federal Police recorded 5,285 cases of unauthorized entry related to Belarus in the border area. According to the Federal Police, 572 cases of unauthorized entry were found by foreigners who traveled through Belarus in the first four days of November.

In fact, there are no controls on the internal borders of the European Union. However, there are exceptions used by Germany and some other countries. For example, German police have been checking the border with Austria since the fall of 2015, but not nationwide. On the German-Austrian border, despite the established controls, significantly fewer unauthorized entries were observed compared to the border area with Poland. The majority of those entering through Belarus and Poland are from Iraq, Syria, Afghanistan and Iran. The Polish border area with Belarus has been declared a restricted area. Journalists and assistants are not allowed.

Off the west coast of Africa: a Russian warship stops a...

A 4.7-magnitude earthquake hits the South Baden region – the epicenter...