Home World Illegal Mines in the Amazon: The Hunt for Gold Leaves a Desert... 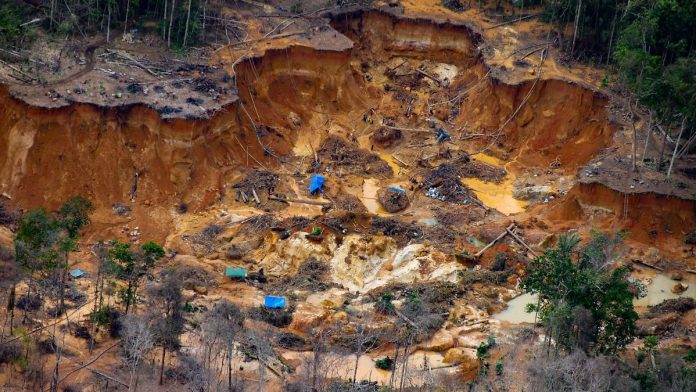 An increasing number of illegal gold prospectors are entering indigenous areas in the Brazilian Amazon. They poison the environment and destroy the livelihoods of the Yanomami. The police are powerless.

When Alexandre Cavalcante looks out the window on his way to work, he sees the largest forest on earth beneath him. Cavalcante is a police officer in the Brazilian Amazon. You can’t get far here without a helicopter. Neither he nor those against whom he intends to act. We are talking about illegal gold prospectors who have been searching for gold in the Amazon since the 1970s. Especially in recent years, the number of illegal mines has increased significantly – due to gold prices and poverty in the region. Cavalcanti talks about “the unimaginable extent” and the massive logistics now behind the illegal gold.

For seven years, Alexandre Cavalcante leads a special unit in the Brazilian jungle that fights against it. He still wasn’t used to the sight of mines: “When you see this endless green, this vast forest, and then out of nowhere a huge area is practically a desert. It’s scary,” he says. Photographer Gabriel Haim accompanied Alexandre Cavalcante in his special unit. He spent two good weeks with the police officers in the woods. Day by day, they locate illegal mines, control them with helicopter and try to destroy them.

“It will never be this forest again”

In the mines they found dozens of workers’ barracks – and machines everywhere that pulled mud from the ground so it could be washed and searched for minerals. They also often find traces of mercury, which is used to separate gold from other materials. A disaster for humans and the environment, because mercury is highly toxic. “Even if they stopped today, it wouldn’t be this forest again,” Cavalcanti says upon seeing the devastation.

The Brazilian constitution actually places these areas under special protection. It is the land of the Yanomami, a group of indigenous people in the Brazilian-Venezuelan border region. Due to the destruction of the environment, they lost their livelihood – there are no fish or animals left to catch. Hunger spreads among the Yanomami tribe. They often interrogate miners for food. They, in turn, often give them alcohol and weapons. “This is how miners create instability in the region,” Cavalcanti says.

Diseases such as malaria also spread faster in devastated natural areas. Alexandre Cavalcanti and his team attempt to render the mines harmless, at least temporarily, by burning engines and dismantling barracks. Workers they meet on site are interrogated. Capturing them would be logistically impossible because they would have to be transported by helicopter. Only police officers can record their data and later submit it to a judge. He then decides whether to issue an arrest warrant. For workers, this makes little difference. “Most of them know what they’re doing is illegal,” Cavalcanti says. Did not see any regrets about it.

Most prospectors don’t get rich

Brazil is now one of the top ten gold producers in the world. Mineral resources from the Amazon are also in demand in Europe. But the simple workers are rarely praised with gold. Most of them live in the simplest conditions in camps in the middle of the forest. Often they do not know any other way to earn a living. A worker says he would like to resign if there is an alternative for him and his family.

The problem, says Alexandre Cavalcanti, is the supporters. Again and again the cops make chases in the air. Then enemy helicopters escape across the border into Venezuela. He and his team don’t want to give up. However, they know that as long as there are buyers of illegal gold, there will also be people looking for it.

Humans are stung thousands of times by killer bees