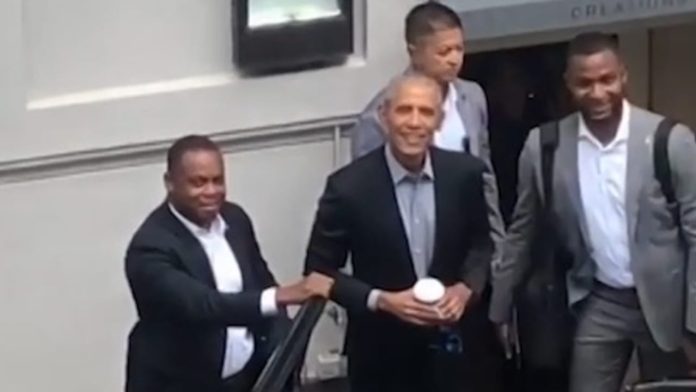 Heavenly voices from above for Obama. In front of a hotel in Copenhagen, Barack Obama surprised by a female choir on the balcony with singing and listening … Obama is in the Danish capital for the Copenhagen Democracy Summit and is actually very busy with it. But he likes to take a few minutes for the little song break… “That was cool,” Obama calls out to the women at the end and applauds enthusiastically. By the way, the small appearance of the so-called Ong Clan choir was not planned. The women were training in the apartment of one of its nine members across from the hotel when they heard noises from the street. When they go out to the balcony, they suddenly see the former president. He, in turn, discovers women, asks what they do and wants to hear a taste. The choir’s Instagram page said, “We laughed because we didn’t really think he was interested. But he was willing to listen, so we sang. And Obama obviously enjoyed the performance too. He also posts heavenly sounds from above on his Instagram page. He writes: ‘When I was at Copenhagen, I met these singers rehearsing on the balcony. They were great, listen to it.”

See also  In the White House, von der Leyen gets Biden's support in the Belarus crisis