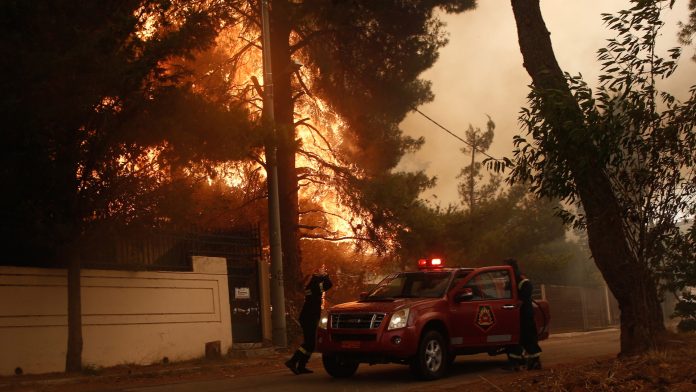 More than 50 fires broke out in Greece. It is very dry, with high temperatures and strong winds that make it difficult to put out a fire. The most dangerous fire breaks out about 20 kilometers northeast of Athens.

After weeks of severe drought, more than 50 bush and forest fires have broken out in Greece, fanned by strong winds. The most dangerous fire broke out in the area of ​​​​Stamata Dionysos, about 20 kilometers northeast of Athens. “Homes were damaged. Many residents had to be moved to safety,” said the deputy governor of the district, Silis Kokalis.

Firefighting planes and helicopters as well as several firefighters battled the flames. Greek Civil Defense has warned of the danger of fire: in the coming days, temperatures are expected to exceed 40 degrees and strong winds are expected across the country.

Fire near Athens ‘out of control’

A forest fire at the foot of the Greek Mount Pendeli is also of particular concern – as it threatens the northern outskirts of the capital, Athens. The fire broke out in the morning, as announced by emergency services and local authorities. Yiannis Kalavatilis, mayor of the stricken Dionysos town, said the fire was “out of control”.

According to the information, the burned area extends over “several kilometers”. Authorities warned residents not to use their mobile phones and called on them to prepare for possible evacuations.

Severe drought, strong winds, and temperatures over 30 degrees cause devastating forest fires in Greece every summer. Three years ago, 102 people died in the country’s worst fire to date in the seaside resort of Mati, near Athens.

Many fires are negligent or arson – eg for property speculation. According to the Kathimerini newspaper, last year 26 arson fires broke out, and 179 other fires were the result of negligence.

The first forest fires caused by the heat wave in Greece