Home World “Go back to Minsk!”: Poland warns migrants via SMS before entering the... 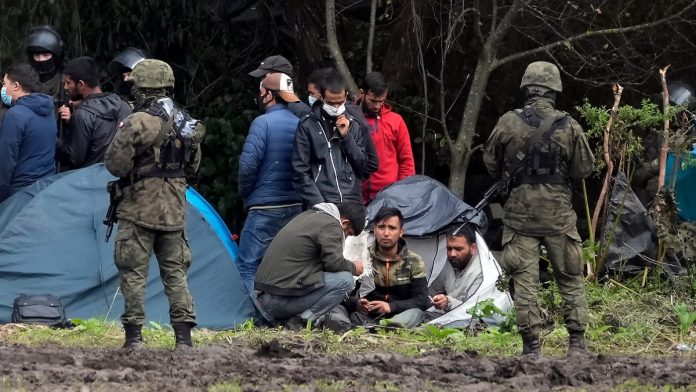 Poland warns migrants through SMS before entering the country

Belarus wants to put pressure on the European Union, and therefore it smuggles migrants to the Polish border. The authorities there warn people in advance by SMS: there is no way to get to Poland. But aid organizations suspect they are also resorting to illegal methods.

Polish border guards warn migrants at the border with Belarus via SMS against trying to enter the European Union illegally. The short message in English, as Interior Minister Mariusz Kaminsky announced on Twitter, read: “The Polish border is closed. The Belarusian authorities have told you lies. Return to Minsk! Do not take tablets from Belarusian soldiers.”

The SMS will be sent to everyone whose mobile phones are in the border area within the range of the Polish cellular network. This includes a link to the website of the Polish Ministry of the Interior, where the situation is explained in English, Arabic and Russian. The government in Warsaw has accused the governor of Belarus, Alexander Lukashenko, of moving refugees from crisis regions to the external borders of the European Union in an orderly manner.

Lukashenko announced at the end of May that Minsk would not prevent migrants from continuing to travel to the European Union – in response to tough Western sanctions against the former Soviet republic. According to the Polish border guards, there were 473 attempts to cross the border illegally on Tuesday. A spokeswoman for the authorities said that was the highest number so far in 24 hours. About 6,000 illegal entry attempts have been recorded since the beginning of September.

Aid organizations suspect that Polish border guards are deporting the majority of migrants to Belarus – so-called returns. This cannot be verified and documented because Poland has declared a state of emergency at the border. Journalists and assistants are not allowed in. A refugee from Turkey told the daily Gazeta Wyborcza that after the deportation from Poland to Belarus, the migrants would be detained by Belarusian security forces, beaten and sent back to the border.

Matt composer for the global version of “El Condor Pasa”