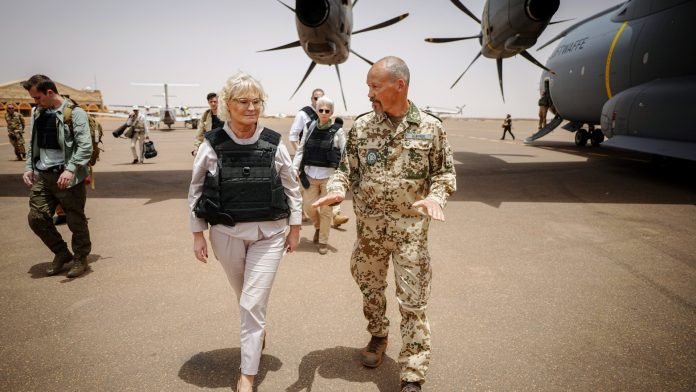 The military council with close ties to Russia, the suspected massacre by the Malian army: the future of the deployment of the German army in Mali is becoming more and more in doubt. During the visit, Defense Minister Lambrecht once again expressed his doubts.

Defense Minister Christine Lambrecht again questioned the increased involvement of the German army in the event of the crisis in West Africa. The Social Democratic Party politician said after visiting German soldiers in Mali that the values ​​of Mali’s transitional military government do not match those of Germany. Since the coup last May, the crisis-ridden country has been led by a military council that maintains close ties with Russia.

“Then I don’t see a future for this state either.”

By participating in the EUTM training mission, Lambrecht said, Germany trains Malian soldiers who then go to work with Russian forces and possibly mercenaries and may commit crimes or human rights abuses. “Then it goes against our values. After that, I don’t see a future for this mandate either,” the minister said.

Lambrecht requested an independent investigation into a Mali military operation in late March in the central city of Mora. Malian soldiers were said to have executed an estimated 300 civilians, some of whom were suspected of being Islamist fighters, according to Human Rights Watch – possibly in cooperation with Russian forces.

See also  Thousands of soldiers in Donbas: Who is provoking eastern Ukraine?

The Bundestag decides at the end of May

Lambrecht said a transparent and complete investigation into the crime was the basis for further cooperation with Germany, the European Union and the United Nations. In the case of the UN MINUSMA, Germany should consider whether and how France’s capabilities can be replaced after its planned withdrawal of its forces from Mali, so that the security of German soldiers is guaranteed.

Lambrecht said the main focus is on skills such as medical supplies, use of attack helicopters and securing the airport in Gao. They are working “under great pressure to find a solution”. At the end of May, the Bundestag intends to decide on the extension of the Mali mandate.