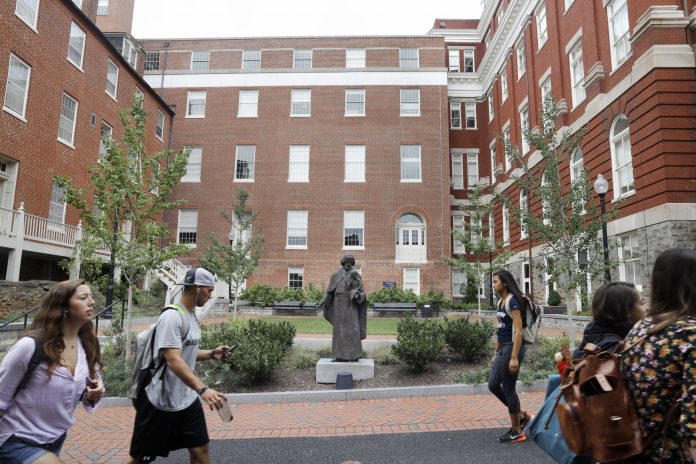 The growing number of Georgetown University students and staff with gastrointestinal conditions this week appears to have contracted a case of norovirus.

The growing number of Georgetown students and staff working with A gastrointestinal disease This week appears to have seen a case of norovirus.

Georgetown University confirmed, Saturday, that it has begun cleaning and sterilizing 46 student rooms, all of which contain people infected with the virus. This was after a Friday night update revealed that the disease was caused by norovirus.

The school said stomach ailments can spread from person to person, as well as touching surfaces or objects contaminated with the virus and putting fingers in their mouths.

So far, the university said more than 90 students have reported symptoms that may be compatible with norovirus. The Keep updating by saying that less than 15 They were taken to area emergency departments, and a smaller subset of these people received intravenous rehydration.

The university said it is taking the following steps to help reduce the spread of norovirus:

Students who are asymptomatic are encouraged to limit social gatherings where the virus can spread.

The number of people on the Georgetown campus with symptoms has decreased over the past few days, according to a Friday morning update.

That update, released at 11 a.m., said the illness affected students and staff as well as people living on and off campus.

“At this time, we have not identified a common food source among those affected,” the school said in a Friday morning update.

Dr. Ranitt Michori, the university’s director of public health, first alerted the campus community to the outbreak on Tuesday evening. At that time, dozens of students from the main campus were said to be ill. Reported symptoms included severe abdominal pain, nausea, vomiting and diarrhea.

The university said most students reported “short-lived symptoms” and no students were hospitalized “despite a few being evaluated and rehydrated at local emergency departments”.

Earlier this week, the university said it was collecting stool samples to identify potential pathogens and said, tentatively, the disease did not appear to be caused by person-to-person transmission.

When the university alerted the community to the disease, Michori pointed to a possible link to the CDC’s report on the recent salmonella outbreak that affected 25 states and infected more than 120 people.