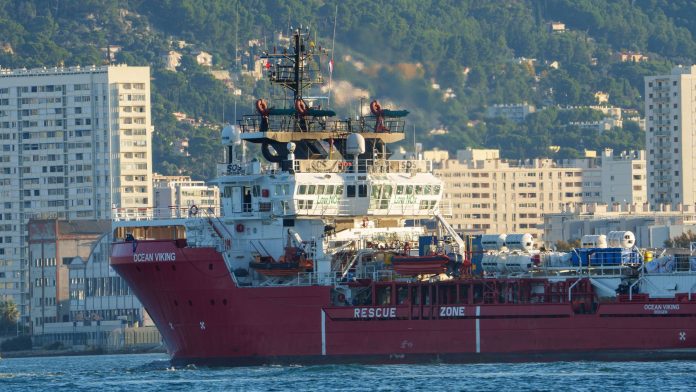 Civic organizations have been rescuing migrants in the Mediterranean for years. Italy, Greece, Cyprus and Malta are now demanding a new law.

Four countries in the southern European Union and the Mediterranean complained in a joint letter about Europe’s handling of the migrant crisis and cited measures against private sea lifeguards. Italy, Greece, Cyprus and Malta have criticized the fact that civilian ships “operate completely independently of the responsible state authorities,” a statement said over the weekend. “We reiterate our position that the modus operandi of these private ships is not in line with the spirit of the international legal framework for search and rescue operations, which must be respected,” he added.

Italy’s new Prime Minister Giorgia Meloni of the far-right Fratelli d’Italia party said on Friday that there would be “new measures” against NGO ships. No details were given. In their letter, the four states demand: “Each country should effectively exercise its jurisdiction and control over ships flying its flag.” The EU Commission and the Presidency of the Council must take the “necessary steps” so that a discussion can take place on the future of such operations.

For years, civic organizations – including from Germany – have been deployed in the central Mediterranean to receive migrants and refugees with their ships. Then they regularly apply in Malta and Italy for permission to call in one of the ports. According to rescue workers, Malta refused requests for years, and in Italy ships were always allowed to dock after often waiting for several days. But earlier this week, Meloni’s government refused to allow SOS Méditerranée to enter a port in Sicily with its “Ocean Viking” and 234 migrants on board.

The ship docked at Toulon in southern France, which led to diplomatic turmoil between Paris and Rome. “Italy does not respect international law or shipping law,” French Foreign Minister Catherine Colonna told the newspaper “Le Parisien” (Sunday). The ship is only registered as an exception. And there will be consequences if Italy sticks to this view.”

Paris suspended a solidarity pact in June that would see Mediterranean migrants seized by Italy and tighten controls at the Italian-French border.

After worrying about health: Mette-Marit appears in public