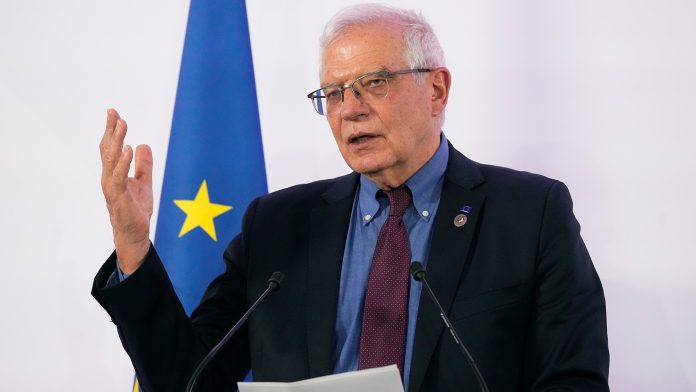 European Union countries have agreed to new sanctions against Russia. This is intended, among other things, to restrict Russia’s access to financial markets. The European Union reserves the right to take further sanctions.

European Union countries have agreed to impose sanctions over Russia’s recent actions against Ukraine. French Foreign Minister Jean-Yves Le Drian said after a meeting with his European Union colleagues in Paris that the punitive measures were targeting members of the Russian leadership.

The decision of the 27 members came unanimously after long negotiations. The agreement will now be submitted to the Council of the European Union.

The sanctions are expected to take effect on Wednesday

The punitive measures are set to come into effect on Wednesday, according to the EU Council Presidency, which is currently held by France. The necessary technical and legal checks will be carried out overnight, and tomorrow the sanctions will be officially approved and published in the Official Journal of the European Union. It takes effect upon publication.

Restrictions on trade and financial markets

Von der Leyen and EU Council President Charles Michel announced earlier that the sanctions target banks, financial markets and trade. So the commission’s draft stipulated, among other things, a restriction of Russia’s access to the European Union’s capital and financial markets and a ban on the trading of Russian government bonds.

Trade with the pro-Russian breakaway regions of Luhansk and Donetsk was also affected. An example of this is the trade sanctions imposed in 2014 after the annexation of Crimea. For example, the EU’s free trade regulations with Ukraine should not apply to areas in eastern Ukraine.

Hundreds of people and companies are on the sanctions list

In addition, sanctions are planned for officials involved in the “illegal decision” to recognize the breakaway regions by Russian President Vladimir Putin. According to diplomats, this includes about 350 members of the Russian parliament who voted to recognize the “people’s republics” of Luhansk and Donetsk in eastern Ukraine, as well as banks doing business in eastern Ukraine or “Russian and other military operations”. Finance in Eastern Ukraine.

The assets of any person, organization or company on the EU sanctions list will be frozen. In addition, the people on the list are no longer allowed to enter the European Union and no further business can be done with those affected.

“It will hurt Russia, and badly.”

Von der Leyen asserted that the measures were “a response to Russia’s aggressive behavior”, which had deliberately fueled the crisis. “If the Kremlin continues to escalate this crisis, we will not hesitate to take further measures,” said the head of the European Commission.

Josep Borrell, the European Union’s foreign policy chief, said the sanctions would “damage and hurt Russia very badly”. At the same time, he warned that the risk of a major conflict must be contained. Following the political agreement reached by EU foreign ministers on punitive measures, a legally binding decision is now required. The package is expected to go into effect later this week.

On Monday, Russia recognized the areas held by pro-Russian separatists in eastern Ukraine as independent states. Then President Vladimir Putin ordered the deployment of troops “to maintain peace,” as he put it. His spokesman Dmitry Peskov said that the so-called separatist people’s republics in Russia also include areas controlled by Ukrainian forces.

The US president’s office said the sanctions would be coordinated with allies and partners. President Joe Biden has already signed an executive order banning business in or with the two breakaway regions. According to informed sources, the US government is also preparing measures targeting the banking sector.