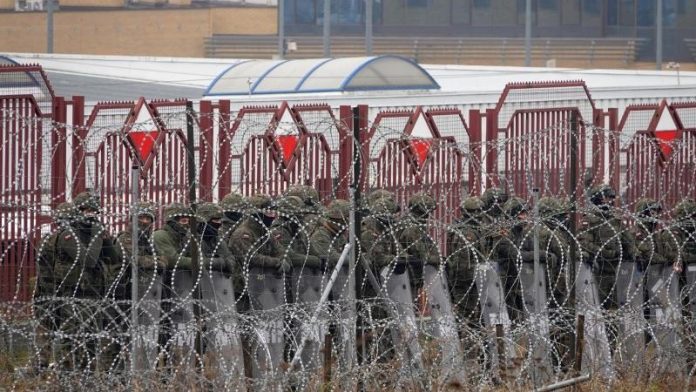 Proszy/Warsaw (dpa) – Belarusian border guards have cleared the temporary camp for migrants on the European Union’s external border with Poland, according to his own information.

A spokeswoman for dpa said on Friday that no more migrants would be accepted on the green edge. Poland confirmed the evacuation. Thousands of people stayed there on their way to the European Union despite the freezing temperatures. Chancellor Angela Merkel assured the UN refugee agency that Germany would support the stranded.

The Executive Adviser spoke by video with High Commissioner for Refugees Filippo Grandi and Director General of the International Organization for Migration (IOM), Antonio Vitorino. According to government spokesman Stephen Seibert, Merkel stressed the important role of the two organizations in humanitarian care, protection and the safe return of migrants.

People who previously camped on the border with Poland are now staying at a logistics center nearby. They complain of hunger and poor hygiene. They say that there is not enough food and hardly any place to wash. Some speak frankly of their fear of deportation, a reporter from the German news agency DPA reported at the site. They hope that the European Union – and especially Germany – will open its borders after all.

Thousands of migrants are stuck at the Belarusian-Polish border and hope to continue their journey to the European Union. Many of these people, who mainly want to go to Germany, come from Iraq, Syria or Afghanistan. Europe accuses the governor of Belarus, Alexander Lukashenko, of pushing people there in an organized manner from crisis areas in order to put pressure on it and avenge the EU sanctions.

In an interview with the BBC, Lukashenko claimed that he did not invite people to his country. Perhaps his powers would have helped them get to Poland. “I will not detain migrants at the borders,” he told the European Union.

The migrants have repeatedly tried to cross the border, which is firmly secured by the Polish security forces – and in some cases they have succeeded. According to the Polish border guards, Belarusian trucks transported the migrants to the border near Dubicce Sirkin on Thursday evening. About 500 people threw stones and branches, and men in Belarusian military uniforms circulated the Poles with lasers.

The British government wants to send more soldiers to Poland to support it, as does the Baltic state of Estonia, which wants to send 100 soldiers, both countries announced.

She criticized the actions of the Polish security forces against immigrants Lukashenko and Russian President Vladimir Putin during a phone call, the Kremlin announced. At the same time, Moscow appealed to the European Union to talk with the rulers of Belarus to resolve the crisis. The European Union no longer recognizes Lukashenko as president due to the actions of the security forces against peaceful protesters after the presidential elections in the former Soviet republic in August 2020.

Merkel spoke to Lukashenko twice this week – criticism came from the governments of Poland and Lithuania, as well as from the Green Party. In light of the desperate situation of the migrants, it makes sense to “talk with those in Minsk who have the opportunity to change something,” said government spokesman Seibert. He stressed that this is by no means a “legitimate act when these talks are taking place”, but rather an attempt to improve a difficult humanitarian situation.

“We can see that there have been changes in the past 24 hours since Minsk moved the migrants into the hangar – like construction,” Swedish Foreign Minister Anne Linde, who currently chairs the Organization for Security and Cooperation in Europe (OSCE), said during a visit to Moscow.