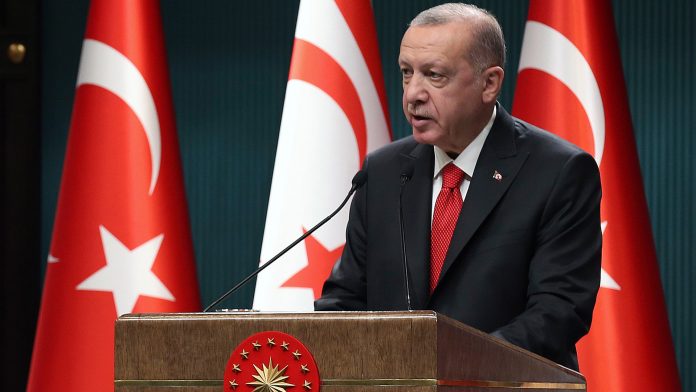 The struggle over Turkish human rights activist Kavala is nearing its climax. In an incendiary speech, President Erdogan threatened ten Western ambassadors with deportation. They had previously requested the release of Kavala.

In the row over Turkish human rights activist Osman Kavala, President Recep Tayyip Erdogan has threatened to expel German and American ambassadors and eight other ambassadors from Western countries, according to media reports.

“We cannot have the luxury of welcoming them into our country,” Erdogan was quoted by the Anadolu Agency as saying. “Is it your place to teach Turkey such a lesson? Who are you really?” Erdogan continued. Neither Germany nor the United States simply allowed the “fraudsters, murderers, and terrorists” to be released.

The embassies of Germany, the United States and eight other countries in Ankara published an appeal on Monday calling for Kavala’s release, referring to rulings by the European Court of Human Rights. He has been in prison for four years without a conviction. Then the Turkish Foreign Ministry summoned the relevant ambassadors.

Among the diplomats appointed, besides Germany and the United States, were representatives of France and the Netherlands. The European Court of Human Rights had already requested Kavala’s release in 2019. Turkey has so far ignored this ruling, despite being a member of the Council of Europe, it is in fact obligated to implement it.

Kavala was originally arrested on charges of financing and organizing the anti-government Gezi protests in Istanbul in 2013. In February last year, a court acquitted him of the charge. Kavala was released from prison after two and a half years in prison, but was arrested again a few hours later – this time in connection with the attempted coup against Erdogan in 2016 and allegations of espionage.

In January this year, the appeals court overturned the first acquittal ruling. If found guilty of espionage, Kavala faces life in prison. Kavala’s next trial is scheduled for November 26.

Rare animal diseases: a case of monkeypox recorded in England