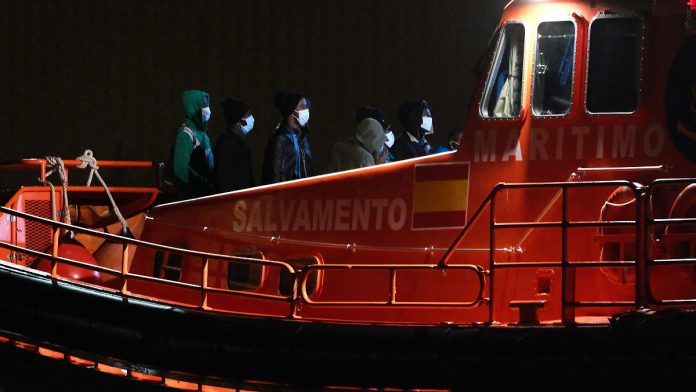 4,400 boat migrants die at the crossing

Spanish naval rescue workers struck an unfortunate balance at the end of the year: 4,400 migrants died or went missing when they tried to reach the Canary Islands by boat. On the other hand, more than 37,000 people have crossed.

Additional patrols on the southern coast of Europe have led to a sharp decrease in crossings on the Mediterranean in recent years. Since then, more and more migrants have tried to reach the Canary Islands, which are located about 100 kilometers from the northwest coast of Africa in the Atlantic Ocean.

Caminando Fronteras said the number of boat people who died had doubled compared to the previous year. With the crossing to the Canary Islands, the refugees put themselves in danger of strong currents. 94 percent of the refugees were found missing because no bodies were found. “These are painful numbers,” said Maria Gonzalez Rollin, who co-wrote the report. She noted that the proportion of women among refugees is increasing. Last year, 628 women and 205 children were among the dead and missing.

The Spanish Ministry of the Interior counts more than 37,000 entries

The numbers of Spanish NGOs are much higher than those of the International Organization for Migration (IOM). The International Organization for Migration indicates that the number of missing and dead on the way from North Africa to Spain is 1,279. According to the Spanish Ministry of the Interior, 37,385 migrants came to Spain last year, compared to 38,014 the previous year.

At the same time, the number of refugees and migrants residing on the islands in the eastern Aegean declined further towards the end of the year. At the end of December, the Greek refugee agency counted only 3,503 people living in camps on Lesbos, Chios, Samos, Leros and Kos. In December 2020, there were still about 17,000 people, 7,100 of them on the island of Lesbos alone. Since then, the Greek government has brought most of the migrants to the mainland, including children, patients and families.