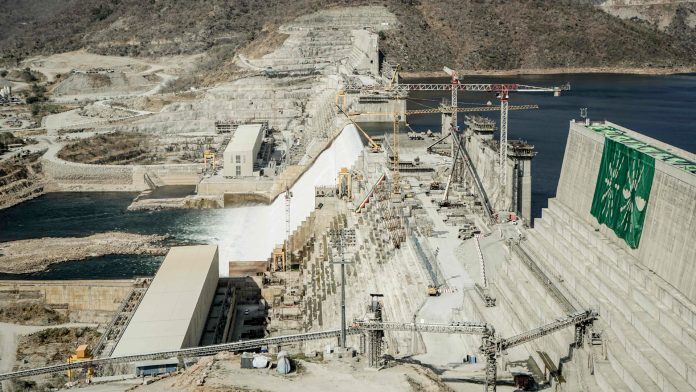 After ten years of construction and heated debate with neighboring countries, electricity production has begun at a huge dam on the Nile River in Ethiopia. It should be fully completed in about three years.

In Ethiopia, electricity production has begun at the huge, controversial dam on the Nile. Prime Minister Abiy Ahmed officially inaugurated the 145-meter-high Grand Ethiopian Renaissance Dam (GERD) in the presence of high-ranking government officials, and led to the historic production of electricity with a series of push-buttons.

From now on, Abi Ahmed said, there is nothing that can stop Ethiopia. The dam, which is being built in northwest Ethiopia, is expected to be the largest dam in Africa after its final completion in two to three years.

According to Ethiopian information, in the future the dam will generate up to 6,500 megawatts of electricity from hydroelectric power. With the dam, Addis Ababa wants to generate the electricity needed for economic development and supply electricity to 60 percent of the population.

“This big dam was built by Ethiopians, but not just for Ethiopians,” a government official said during the opening ceremony. “All African brothers and sisters will benefit from the hydroelectric power station.”

Ethiopia had to raise huge sums for the construction of the hydroelectric power plant – according to expert estimates, a total of $4.2 billion. Each employee was asked to forego a month’s wages for the project. In addition, the country’s economy was burdened with the taking of many loans by the state. For a long time, the project was on the verge of cancellation due to delays in construction work.

See also  Greece fines elderly people who have not been vaccinated

Neighbors are afraid of their water supply

With the hydropower plant project, Ethiopia has also taken high risks in foreign policy. For years, the dam caused disputes between Egypt and Sudan, which border the Nile. While Ethiopia says the 1.8-kilometre-long and 145-meter-high dam is needed to produce electricity, Sudan and Egypt fear for the water supply.

Egypt, which gets more than 90 percent of its water needs from the river, fears that too little water will flow into the Nile in the future. States are struggling to come to an agreement on how to fill the reservoir and operate the dam. The UN Security Council dealt with the conflict last summer. However, Ethiopia rejected the commission’s mediation proposal.