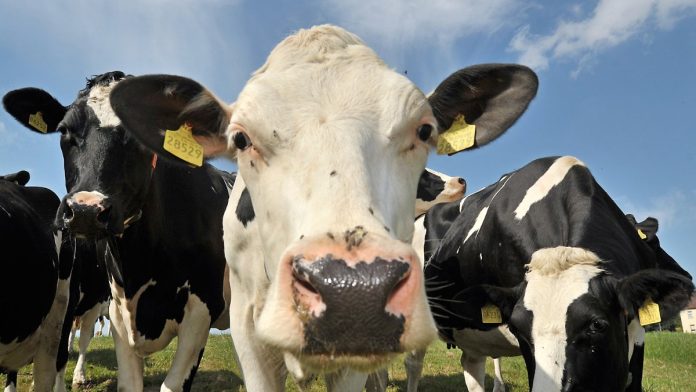 Turbocharger for climate crisis
Methane concentration is rising faster than ever

Methane is the second largest driver of human-caused climate change. US researchers assume that there will be a record increase in concentration in the atmosphere in 2021 – the second year in a row.

The global concentration of methane in the atmosphere has increased more than ever in the past year. This was stated by scientists from the US research agency NOAA (National Oceanic and Atmospheric Administration) and a warning of the accelerating impact of greenhouse gases on climate change.

Methane is the second most important man-made cause of global warming after carbon dioxide. Already in 2020, scientists have observed a record increase in the level of methane in the atmosphere. Preliminary analyzes have now shown that this value was clearly exceeded again in 2021. Compared to the pre-industrial era, methane levels have increased by 162 percent. The increase has accelerated in recent years in particular. Compared to the years 1984 to 2006 alone, there is a 15% increase from today’s perspective.

Figures from the German Federal Environment Agency Show a similar trend. Methane values ​​taken at German measuring stations are above the global average recorded by the World Meteorological Organization (WMO). As is usual with greenhouse gases, the concentration of methane in the atmosphere is given in “parts per billion” (ppb), that is, the number of methane molecules per billion air molecules.

Global methane values ​​have one thing in common: in all the statistics, there has been a marked increase in the concentration of methane in the air since 2007. The exact reasons for this development are unclear. There are many possible causes. On the other hand, agriculture – especially livestock – is a major source of methane. About a third of methane emissions are also caused by the consumption of fossil raw materials. Only through leaks at drilling sites and along gas pipelines According to the European Space Agency ESA Large amounts of climate-damaging methane are escaping into the atmosphere without use – for example on the way from Russia to Germany.

However, the increased concentration of methane in the atmosphere could in itself be a result of climate change and a sign of impending acceleration. Because large amounts of methane are confined to the so-called permafrost soils in the northern hemisphere. In these regions of all places, surface temperatures have recently risen at about twice the global rate. As the previously permanently frozen layers of Earth slowly thaw as a result of global warming, the greenhouse gases they contain are released and are relentlessly released into the atmosphere.

It is unclear to what extent the thawing of permafrost actually contributed to the current increase in methane concentration. Either way, NOAA researchers rated the developments as worrisome: Last year alone, about 640 million tons of methane were released through human activities. In addition, there are 36 billion tons of carbon dioxide.

While global carbon dioxide emissions remain the main long-term problem, methane acts as a short-term accelerator and amplifier for the climate crisis. Unlike carbon dioxide, methane remains in the atmosphere for a relatively short time; Average of less than a decade. On the other hand, the greenhouse effect is much stronger than that of carbon dioxide. According to NOAA, methane has 25 times greater potential for heating the atmosphere. Effects on the global climate can occur in a relatively short time. Humans and nature then have little leeway to adapt to changing environmental conditions.

Specifically, because methane degrades relatively quickly in the atmosphere, even a moderate reduction in emissions would contribute significantly to climate protection. Rick Spinrad, president of the National Oceanic and Atmospheric Administration (NOAA) also noted this: “Reducing methane emissions is an important tool that we can use now to mitigate the effects of climate change in the near future and to rapidly reduce the pace of global warming,” he said in a statement, citing him. In a statement issued by the US Agency.