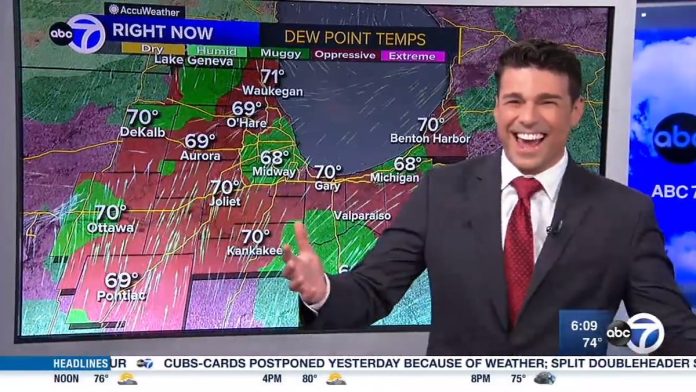 For the past three years, Greg Dutra has hosted Weather at ABC 7 Chicago. But only now the meteorologist noticed that he was standing in front of a touch screen. Who can still serve! His pure joy at this circumstance caused a great response.

Amid the Chicago weather forecast, TV meteorologist Greg Dutra suddenly falters. The American regional radio presenter, ABC 7 Chicago, was flicking his right hand across the screen when the displayed map suddenly moved. “Can I do that? Crazy,” Dutra says, interrupting his moderation in the middle of the Thursday morning livestream. He looks at the camera in disbelief. Laughter erupts in the studio.

Dutra can’t believe he never noticed that the big screen he uses for weather forecasts is a touch screen. Quite pleased, he immediately tried to implement various functions in the live broadcast: pans the map, zooms in, tilts the view. “Are you serious? Have you found that out now?” his colleague Val Warner amused him. Another studio presenter, Terrell Brown, even broke into the picture and, besides the smiling Dutra, also touched the touchscreen in utter amazement. “It’s a great day!” The weather presenter shouted joyfully.

A video of the short scene has since gone viral on Twitter. Several American media picked up the cheerful clip. The meteorologist himself posted it on Thursday and wrote, “It wasn’t in the training manual!” Meanwhile, the frequency has been played more than 1.8 million times. Dutra’s tweet has received tens of thousands of likes.

As The New York Post reported, Dutra had been working as a television meteorologist for ten years. He worked for the ABC television network for three years. A few hours after his video went viral, he was surprised by the response, tweeting, “Well, that’s past that ceiling. I have nothing to sell or advertise other than: Be kind to those around you. Everyone is going through something.”