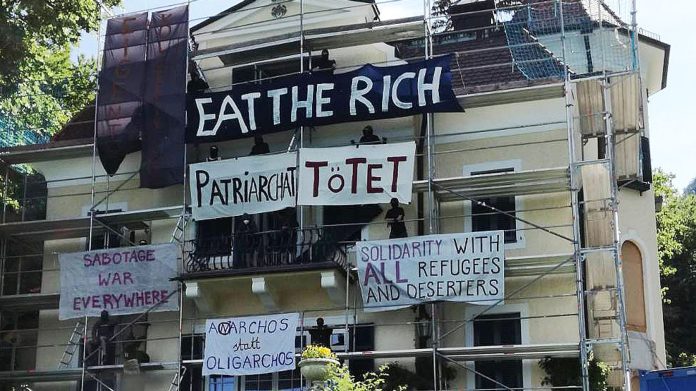 Activists occupied a villa on Lake Attersee in Austria. She is said to belong to the family of a Russian oligarch – even if nothing is officially known about her.

Activists occupied a naval villa in Austria because of their alleged connection to a Russian oligarch. The group called for the confiscation of property in Unterburgau am Attersee near Salzburg. They hung banners with slogans such as “Anarchos instead of the oligarchs” on scaffolding. According to activists, up to forty people took part in the operation, and according to the police there were only ten. A police spokesman told dpa that officials are in contact with them at the scene.

According to the Austrian Land Registry and the Ministry of Finance, the villa is not owned by the oligarchs, which are subject to European Union sanctions. Thus it belongs to a company that is in turn attributed to a member of the oligarch’s family.

The Directorate of State Security and Intelligence, which is responsible for allocating the assets of oligarchs in Austria, has indicated that it often encounters fraud structures that conceal the true ownership structure.

See also  Göring-Eckardt: "The whole store is clearly not ready"