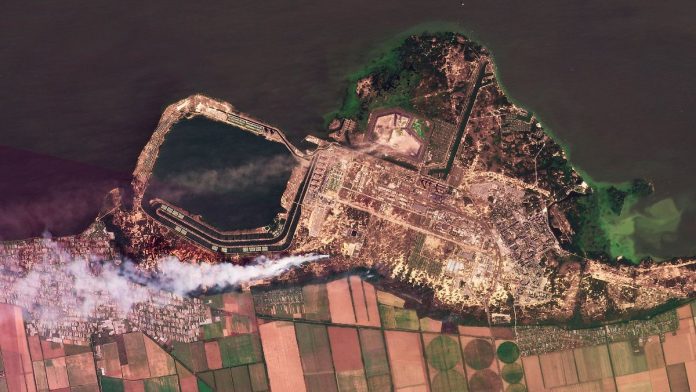 The Zaporizhia nuclear power plant was up and running again when it came under fire again. Russia and Ukraine blame each other. The operator now sees the danger of radioactive radiation escaping. Infrastructure is damaged.

Russia and Ukraine again accused each other of bombing the Zaporizhia nuclear power plant, which is occupied by Russian forces. Enerhoatom, the operator of the state power plant, told Telegram that there was a risk of violating radioactive radiation protection standards. The largest nuclear power plant in Europe was shot several times by the Russian army in the course of a day.

On the other hand, the Russian Defense Ministry announced that the nuclear power plant was bombed three times by artillery from the Ukrainian side within 24 hours. Ministry spokesman Igor Konashenkov said in Moscow that four shells landed on the roof of a facility storing nuclear fuel from the US company Westinghouse. This cannot be verified independently. The spokesman also said that other projectiles landed near storage facilities with fuel rods and radioactive waste. However, the radiation status is still within the normal range.

“Technical personnel are responsible for checking the technical condition of the nuclear power plant and ensuring its operation,” Konashenkov said. He reiterated that Russian forces were guarding the facility but had no heavy weapons nearby. The Russian occupation authorities in the Zaporizhia region had spoken again earlier about the bombing of the nuclear power plant.

After the nuclear power plant was temporarily disconnected from Ukraine’s power grid following an emergency shutdown on Thursday, Enrhautom said, two parts were back in the grid and producing electricity. But due to the Russian military presence, the safe operation is in jeopardy. Infrastructure has already been damaged. There is a risk of leakage of radioactive material.

“People of the Ukrainian nuclear power plant continue their work and are doing everything possible to ensure nuclear and radiological safety,” Enerhoatum said. At the same time, the worker complained that the Russian occupiers were putting pressure on the staff. The statement said Ukraine calls on the international community to compel Russia to hand over the nuclear power plant “to the control of our country for the safety of the whole world.”