Home World After the President’s Trial: Protesters in Peru storm the airport 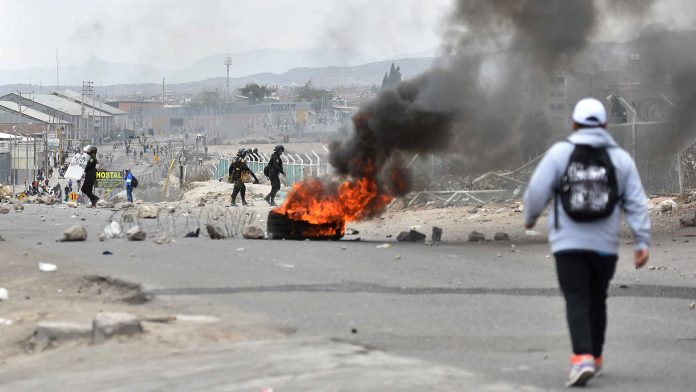 Demonstrators enter Arequipa’s international airport during protests against the ouster of Peruvian President Pedro Castillo. The Peruvian transport ministry said the rioters destroyed security infrastructure and set fire to a sentry box. The airport, one of the largest in South America, was closed for security reasons.

Arequipa is located in the south of the Andean country and, along with Apurimac and Ica, is one of the regions where the Minister of the Interior, César Cervantes, declared a state of emergency. There have been deaths and injuries in protests and clashes with security forces in the past.

On Monday, the human rights ombudsman, Eliana Revollar, spoke of seven deaths in two days, including two minors. All the victims died from gunshot wounds. Revollar said 32 civilians were wounded and 24 policemen wounded. “The situation in the country is very tense.”

She called for Boulwart’s resignation and new elections

Riots also broke out in the capital, Lima, with prosecutors’ offices and radio and television stations attacked. According to media reports, protesters also blocked highways in several parts of the country.

Due to the disturbances, the train route between Cusco and the Inca site of Machu Picchu, popular with tourists, was closed. PeruRail gave security concerns as the reason and cited calls for a demonstration from various organizations in Cusco. The railway operator fears that the rails will clog.

There were protests, especially in rural areas of central and southern Peru. The regions are mostly considered strongholds of Castillo and his followers. But also in Lima and other cities, thousands of people demanded the resignation of Castillo’s successor Dina Boloarte, the closure of parliament, early new elections and The release of the detained former president.

The former vice president replaced the left-wing politician on Wednesday. Castillo wanted to prevent a vote of no confidence in himself by dissolving Congress in a short time – in order to form an emergency government and rule by decree in the future. Many deputies considered it an attempted coup. Castillo was deposed and arrested. “Humiliated” and “kidnapped,” Castillo wrote on Twitter on Monday.

In light of the protests, Bulwart aims to hold early presidential and parliamentary elections in April 2024. According to media reports, the government submitted a similar bill to Congress on Monday.