Home World After the lightning: a fuel depot explodes in Cuba 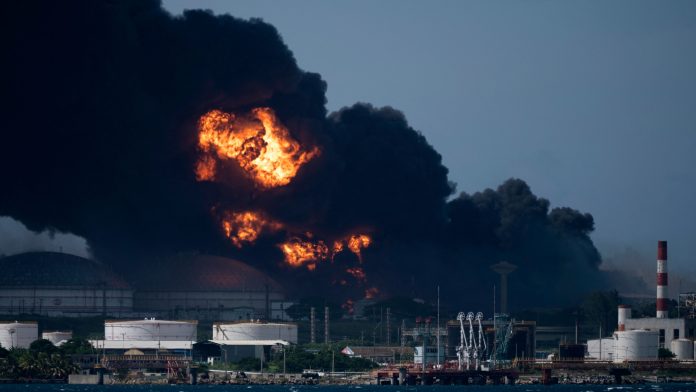 After a lightning strike caused a fuel depot in Cuba to explode, the fire at the scene was not brought under control. Specialists from Mexico and Venezuela must help now.

After a series of explosions at a fuel depot in northern Cuba, emergency crews battle the flames. President Miguel Diaz-Canel said the extinguishing could take some time. Specialists from Mexico and Venezuela traveled to Cuba to support the firefighters in the operation.

Lightning exploded in a fuel tank in the port of Matanzas during a thunderstorm. The fire later spread to other parts of the facility, causing other tanks to explode in the area. More than 100 people have been hospitalized since then. Eight of the victims were in critical condition.

President Diaz-Canel immediately assessed the situation and visited the wounded in the hospital. Port operations in Matanzas have been temporarily suspended. The authorities diverted the ships to other ports. According to the county government, about 800 people from nearby residential areas have been moved to safety. At least 17 people who worked near the tanks are still missing. Because of the high temperatures, the emergency services were initially unable to move further to search for the missing persons.

The fire may have consequences for the power supply

Cuba is experiencing a serious economic crisis and major energy supply problems. Recently, there have been frequent blackouts on the Caribbean socialist island. The tanks damaged by the fire contained Cuban crude oil and heavy fuel oil, which is used primarily to generate electricity. Constant power cuts sparked anti-government protests in Cuba a year ago.