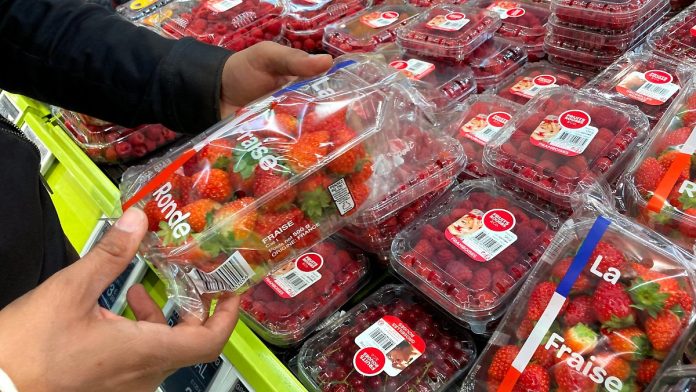 France wants to completely eliminate single-use plastic by 2040. With the ban on the sale of many types of fruits and vegetables wrapped in plastic, more than one billion packages will be saved as early as 2022. Many consumers have spoken out in favor of this measure.

In France, many types of fruits and vegetables wrapped in plastic may not be sold in the future. According to the Ministry of Environment in Paris, the new rule has been in effect since January 1, 2022. Initially, cucumbers, onions, potatoes, peppers, apples, pears and oranges were affected. Exceptions are provided for packages of more than 1.5 kg. By 2026 at the latest, consumers won’t be able to buy fruit and vegetables in plastic packaging – not even cherry tomatoes, mushrooms, berries or salads.

The Guardian reported that Emmanuel Macron described the ban as a “real revolution”. With the law to gradually ban single-use plastics by 2040, France is taking the global lead in reducing plastic waste. Similar measures are also planned in neighboring Spain from 2023.

According to previous information, 37 percent of vegetables and fruits in France are sold canned so far. With the ban, more than 1 billion plastic packages must be saved annually.

according to Ifop study by WWF France In 2019, about 85 percent of citizens supported a ban on single-use plastic products and packaging. More than two million people also signed a petition calling on the government to stop the plastic waste crisis. On social media, consumers complained about what they considered unreasonable packaging, such as coconuts wrapped in several layers of plastic or individual bananas in plastic bags.