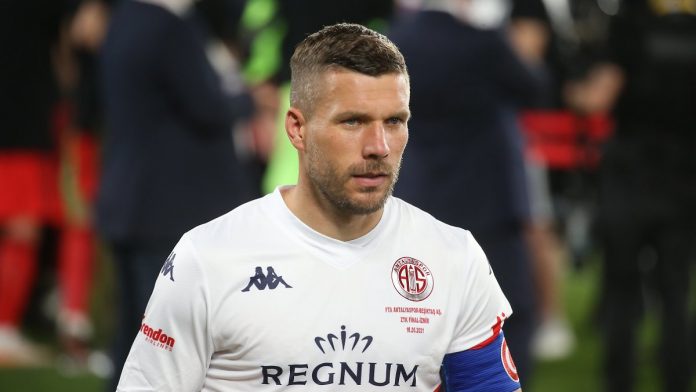 Lukas Podolski’s time at Antalyaspor is coming to an end. Farewell, the Turkish club wrote a few words on Twitter. The 35-year-old is very upset about it and releases his displeasure.

Lukas Podolski has left some bitterness for the Turkish First Division football team. As the club bid farewell to the former national footballer only via Twitter, Podolski’s reaction is furious. “Every player playing for Antalyaspor should have a farewell worthy of their name,” Podolski wrote on Turkish Twitter. “I was expecting our CEOs to thank me in person and not through social media. What a shame.”

Podolski’s contract with Antalya expired at the end of the season, and the 35-year-old has been playing for the club since January 2020. Antalya tweeted the short sentence “We thank our player Lukas Podolski for his commitment and wish him all the best in his new life” on Thursday.

Two weeks ago, Podolski missed a surprise with the club and lost the Turkish Cup final. The former world champions, who won the title with Galatasaray Istanbul in 2016, lost 2-0 (2-0) in the final against Besiktas Istanbul. For the capital club, it was the tenth victory in the cup and the third double.

Podolsky has repeatedly left the door open on how things will go after Antalyaspor for him. Before moving to Turkey, he had already played in England, Italy and Japan after his stints in the Bundesliga at 1. FC Köln and Bayern Munich.