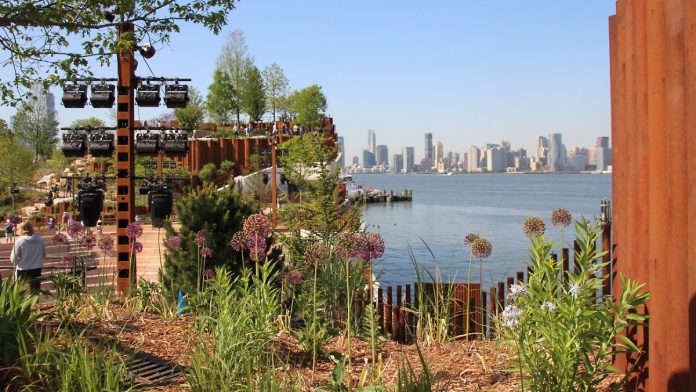 A few years ago, activists stopped the Small Island project. New York is now opening its planned island park on Manhattan’s west coast after all. The small island stands on stilts in the middle of the Hudson River. And the place itself also has a special meaning.

After years of debate, delays and an explosion in costs, New York has a new island park. Hundreds of people flocked to Little Island on Manhattan’s west coast, a park built on stilts in the Hudson River. In addition to flowers, trees, lawns, and views of the Manhattan skyline, the facility also provides theater facilities for outdoor events as well as snack and beverage stalls. The building was funded by media mogul Barry Diller with about 260 million dollars (about 210 million euros).

Berth 54, the ocean liner landing stage of the British shipping company “Cunard-White Star”, once stood at the “Little Island” site. In 1912 docked here, “Carpathia” with more than 700 passengers who were rescued from the sinking “Titanic”. In 1915 the “Lusitania” set off from here, and shortly thereafter a German submarine sank off the southern coast of Ireland, killing nearly 1,200 people. Later the pavement rusted, and today there is only a rusty steel frame bearing the inscription “Cunard White Star” reminiscent of historical significance. Beside her, there were recently signs that read, “Welcome to Little Island.”

Media mogul Diller – who, together with his wife, star designer Diane von Furstenberg, announced the revival of the former high-rise railway line, the High Line – several years ago that he wanted to build a park on the sidewalk site. At the time, he expected costs of about $ 35 million, and the project was titled “Pierre 55”, but many people also mocked him as “Diller Island.”

Enthusiastic criticism at the opening

Activists protested, among other things, due to environmental and aesthetic concerns, costs rose – and Diller canceled the project in 2017. Only after the mediation of Governor Andrew Como did Diller “one last attempt to revive the project.”

At the opening, the park received mostly enthusiastic reviews. The New York Times architectural critic Michael Kimmelman described him as a “magician.” Just a few weeks ago, the opposite Whitney Museum had already put another attraction next to it: a statue of American artist David Hammons tracing the outlines of a former port building with steel bars. The steel structure, called “Day’s End,” will be permanently visible from now on at Hudson River Park.