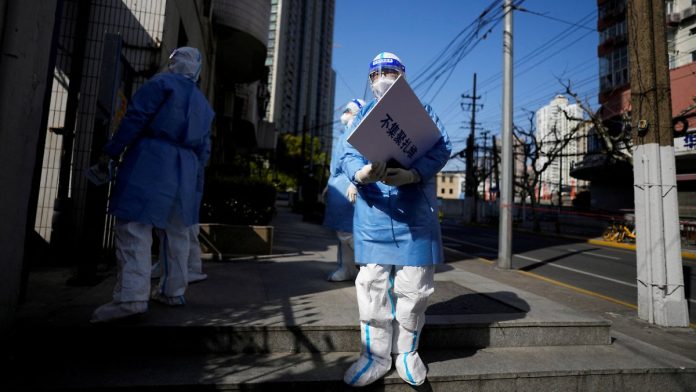 Shanghai has become the epicenter of the Chinese earthquake. There is a strict lockdown in the capital, which worries the US Embassy. US citizens warned that these measures would be applied “arbitrarily”. People in Beijing don’t like hearing that.

The Chinese government has strongly criticized the United States for its statements regarding the coronavirus policy in Beijing. Chinese Foreign Ministry spokesman Zhao Lijian said China’s disease control policy is “scientific and effective.” Beijing firmly rejects the “baseless allegations” made by the US embassy in China.

The embassy in Beijing agreed to the “voluntary departure” of non-essential staff from its consulate in Shanghai on Saturday. She warned US citizens in China to expect “arbitrary enforcement” of virus restrictions. The US State Department had previously warned against travel to Shanghai due to the stricter restrictions “including the risk of parents and children being separated”.

“This is the decision of the United States,” Foreign Ministry spokesman Zhao said. “We have full confidence that Shanghai and other places will overcome this round of the epidemic.” China is grappling with the worst wave of infections since the epidemic began, and 90 percent of newly reported cases are from Shanghai. The economic capital set a new record of 24,943 new infections on Sunday.

At the same time, China is one of the last countries in the world to adhere to the so-called zero-Covid strategy: strict lockdowns and mass testing aimed at preventing any infection. Accordingly, Shanghai was completely or partially closed for two weeks. About 25 million people have been ordered to stay at home.

The strict rules and their consequences are increasingly causing discontent among the population, who vent their anger at food shortages and strict restrictions in online networks. The highly controversial measure to separate children infected with the coronavirus from parents who test negative has been watered down again after heavy criticism. However, no fundamental change in strategy is in sight. The regulations “will not be relaxed at all,” city health official Wu Qianyu said at a press conference.

See also  Visiting the external borders of the European Union: "NATO is on the lookout"