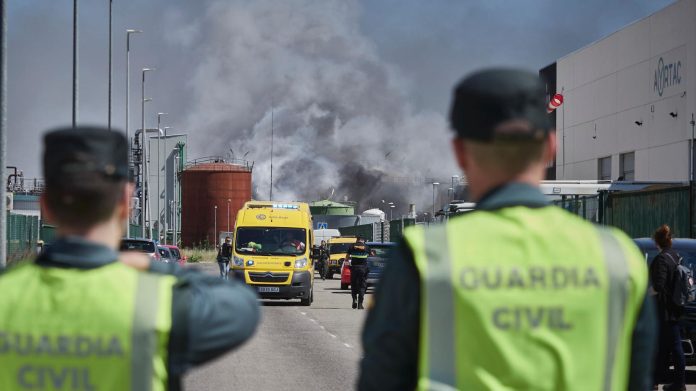 The plume of black smoke can still be seen from afar: two people were killed in an industrial fire in the Spanish province of La Rioja. More bangs does not seem impossible.

Two people were killed in an explosion and subsequent fire at a biodiesel plant in the northern Spanish region of La Rioja. Citing security authorities, El Dia de La Rioja newspaper and other media reported that the plant and the entire El Recuenco industrial zone in the municipality of Calahorra were evacuated immediately after the emergency on Thursday afternoon. In addition, about 250 children who took part in a nearby school trip have already been taken to safety.

A thick plume of black smoke and flames could be seen from afar after the explosion, according to videos and photos posted by media and social media. Calahorra Municipality said all available police and firefighting units have been sent to the plant to fight the fire and provide security. The area where further eruptions cannot be ruled out should be avoided. The cause of the explosion, which occurred in Calahorra, about 300 kilometers northeast of Madrid around 1 p.m., remained unclear at first.

Diet: a bodybuilder eats kilograms of raw meat – says the...