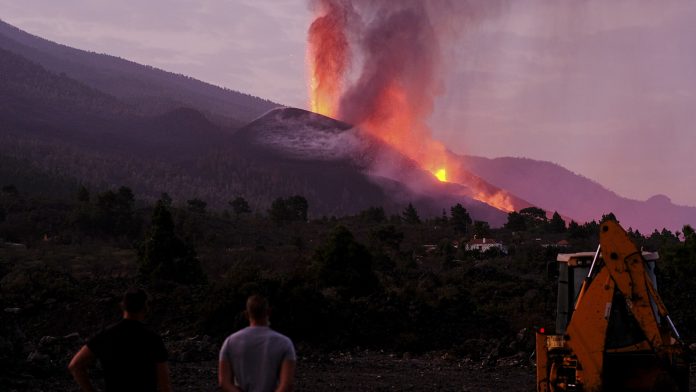 In the volcano on the island of La Palma, which erupted two weeks ago, two new fissures formed, from which lava flows. According to the authorities, the volcano has become “more aggressive”. The researchers recorded eight new earthquakes.

Fresh lava flows from the volcano in the Cumbre Vieja mountain range on the Canary Island of La Palma. Two other fissures form from the lava. Authorities have reported “intensive volcanic activity” in the area.

Fiery red and orange molten rock scattered through the new fissures about 15 meters toward the sea – paralleling the lava flow that reached the Atlantic Ocean earlier this week.

Miguel Angel Morquinde, technical director of the authority responsible for volcanic eruptions in the Canary Islands, reported that the volcano was “much more aggressive” about two weeks after its eruption. The scientists also recorded eight new earthquakes with a magnitude of 3.5 overnight. The gas and ash were said to be emitted at altitudes of up to 6000 metres.

As the head of the Canarian regional government, Angel Victor Torres, said, 80 million cubic meters of lava have been released since the eruption erupted on September 19. On Wednesday night, lava flowed into the sea for the first time. It formed an area of ​​u200bu200bmore than 20 hectares there, and it is still growing. This produces large amounts of smoke and toxic gases, which is why a 3.5-kilometer safety zone has been established.

The La Palma city administration reports that the air along the coast is monitored for its sulfur dioxide content, but so far there are no health risks.

1000 buildings destroyed, but no deaths

However, residents were asked to stay indoors. She also recommended protective masks and protection from volcanic fly ash. To date, the lava has destroyed more than 1,000 buildings and wiped out 338 hectares of land.

So far, there have been no deaths or injuries as a result of the outbreak – 6000 people were quickly moved from the affected area to safety.