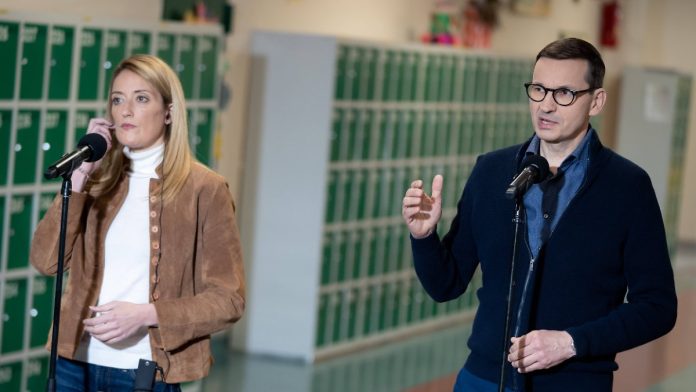 The head of the Polish government wants more “real sanctions” against Moscow. As justification, he indicated the stable course of the Russian currency. At the same time, Morawiecki urgently opposes the first calls for relaxation.

Poland is pushing for further toughening of EU sanctions against Russia. According to Prime Minister Mateusz Morawiecki, the punitive measures taken so far are not enough. In a meeting with the President of the European Parliament, Roberta Mitsula, at the Polish refugee reception center, the conservative nationalist politician noted that the Russian ruble has since returned to the level it was before the attack on Ukraine.

“This means that all economic measures – micro and macro, fiscal, budgetary, monetary – have not worked as well as some politicians would have liked,” Morawiecki said. In some EU countries, under the pressure of the economy, there is talk of normalization of relations with Russia. The prime minister of the European Union and NATO vehemently refused.

“There will be no return to normal until Ukraine defends its freedom and sovereignty. Until that happens, Europe will be weak, humiliated, toothless and unable to fulfill its core universal values ​​such as freedom and the right to life to act. That is why more “real sanctions” are needed. “.

Federal Economy Minister Robert Habeck recently announced further sanctions against Russia after meeting with his French counterpart Bruno Le Maire. He said the latest package of sanctions should not have been the last.