Home World The reason was not mentioned: Russia wants to close marine areas with... 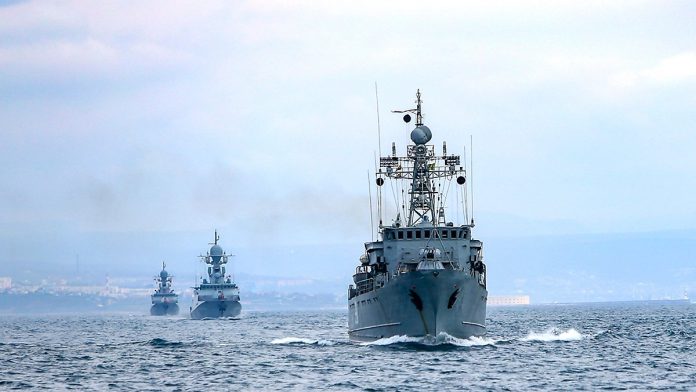 The reason was not mentioned

Russia wants to close off the maritime areas from now on

Crossing the ports of Ukraine will be more difficult for a foreign navy in the next few months: Russia wants to fulfill its declaration and closes offshore areas in the Black Sea. It is reported from Moscow that only Russian territorial waters have been affected. The European Union, Ukraine and NATO criticize the project as a provocation.

With immediate effect, Russia wants to close several offshore areas in the Black Sea near Ukraine’s Crimea peninsula, which were incorporated in 2014. The West criticizes this approach. The Ministry of Defense in Moscow said that foreign warships and other country’s ships are no longer permitted to pass through these waters until October 31, but cargo ships can. It is said that the region from Crimea from Sevastopol to Gorzov was affected.

Shipping through the Kerch Strait, which connects the Black Sea with the Sea of ​​Azov, should not be obstructed. The strait is considered an international water body. In November 2018, the Russian Coast Guard prevented two Ukrainian military ships from attempting to pass there and 24 Ukrainian sailors were arrested. They weren’t released until 2020.

The West believes that international law has been violated

The criticism of the announced closures came from the European Union, Ukraine and NATO. European Commission External Relations spokesman Peter Stano called on Russia to halt the project. Stano, from Russia’s state-run TASS agency, said it was about “more violations of international law” and further destabilization of the region. In the West, there is concern that the passage rights stipulated in the United Nations Convention on the Law of the Sea might be restricted and impede international shipping. NATO called on Russia to guarantee free access to Ukrainian ports in the Sea of ​​Azov and freedom of navigation. The Ukrainian Foreign Ministry accused Russia of “increasing escalation at sea.” Moscow stressed that the affected areas are in Russian territorial waters. However, Russia’s claim to the territories is not recognized. The reason for the closure was not mentioned at the outset.

In the past few days, Russian soldiers have been maneuvering in the Crimea. The marches of Russian, but also Ukrainian forces, have raised international concerns recently that fighting in the conflict zone in eastern Ukraine could escalate again. According to official information, on Friday, Russia began to withdraw the forces that were also transferred to the Crimea. Ukraine welcomed this.

About seven years ago, parts of eastern Ukraine in Donetsk and Luhansk along the Russian border were under the control of pro-Moscow rebels. According to UN estimates, more than 13,000 people have been killed since the conflict began in 2014. The peace plan agreed upon in 2015 is pending.

What did the Russian army do to Alyssa’s mother (4 years...