Home Tech The oldest object in the universe has been observed – the distant... 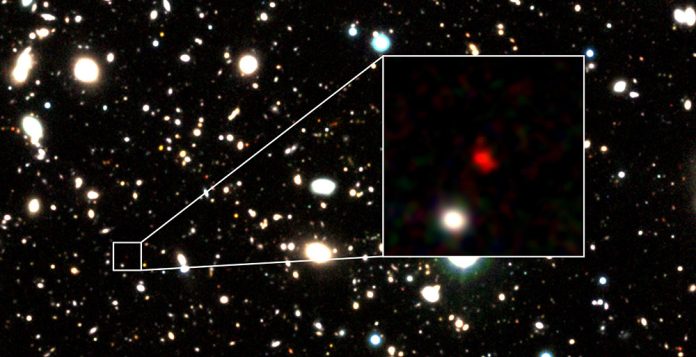 New record holder: Astronomers have identified the most distant astronomical object ever observed – a galaxy about 13.5 billion light-years away. So it already existed about 300 million years after the Big Bang. Even more unusual is the strong ultraviolet radiation from this object, which comes either from an extremely high rate of star formation, or from an active supermassive black hole. If the latter is confirmed, it will also be the most distant quasar ever discovered.

When were the first stars and galaxies formed? How did they grow up? So far, astronomers know only a few objects that are more than 13 billion light-years away from us. These include many unusually massive quasars, whose active black holes emit radiation so intense that they can be seen at long distances. The oldest galaxy detected so far is 13.4 billion light-years away, and thus exists 400 million years after the Big Bang.

330 million years after the Big Bang

But now there’s a new record holder: astronomers working with Fabio Paccucci of the Harvard and Smithsonian Center for Astrophysics have found a candidate galaxy up to 13.5 billion light-years away from us. This galaxy, dubbed HD1, existed 330 million years after the Big Bang – and is therefore much older than any other previously known astronomical object in the universe.

HD1 was detected using multiple telescopes, including the Spitzer Space Telescope, the Subaru Telescope in Hawaii, and the Atacama Large Millimeter/submillimeter Array (ALMA) in Chile. “Finding HD1 out of more than 700,000 organisms has been arduous,” says co-author Yuichi Harikan of the University of Tokyo. “However, the redshift of HD1 fits surprisingly well with the expected features of a galaxy about 13.5 billion light-years away.”

Cradle of the first generation of stars?

Equally surprising: this object from the early days of the universe emits an unusually large amount of ultraviolet light. “It seems that some high-energy process is happening in it, or rather they did it 13.5 billion years ago,” says Bakuchi. but who? One possibility is particularly active star formation, as is the case for so-called starburst galaxies.

But when the researchers calculated how high the rate of star formation is based on radiation, they came up with incredibly high values: “HD1 should produce more than 100 stars per year, which is at least ten times more than one would expect for such a galaxy,” he explains. Bakuchi. This would be different, however, if first-generation stars, called third-community stars, formed in the distant galaxy.

“These stars were much denser, brighter, and hotter than modern stars,” Pacuchi explains. “Because Group C stars produce more ultraviolet light, this may explain the extreme ultraviolet brightness of HD1.” If confirmed, it would also be the first direct evidence of this first generation of stars.

Or is it one of the first quasars?

But there’s another possibility: HD1’s intense ultraviolet light may have come from an active black hole at the center of this early galaxy. When such a supermassive black hole absorbs and devours matter in the form of gas and dust, it releases large amounts of energetic radiation. If this is the case, HD1 will also be the farthest and oldest quasar ever observed.

“HD1 breaks the record for highest redshift in a quasar by nearly two times — which is fantastic,” says Avi Loeb, Pacuchi’s colleague. The oldest known quasi-star to date, J0313-1806, is younger than HD1 by about 350 million years. However: the radiation from HD1 shows that the active black hole in this galaxy should weigh about 120 million solar masses. “So it had to grow at an unprecedented rate from a gigantic predecessor,” Loeb says.

A combination of the two?

According to astronomers, both scenarios can be visualized, but they are difficult to understand in astrophysical terms. So they suspect that HD1’s unusually strong radiation is caused by a combination of both: an active black hole in the center of this early galaxy and a very powerful star formation. The team explains that “the contribution of star formation will reduce the necessary mass for a black hole, and thus require less extreme growth conditions to become very massive in such a short time after the Big Bang.”

The nature of the new record holder in the early universe could soon be revealed with the new James Webb Telescope. Because the highly sensitive infrared optics of this space telescope are specifically designed to look back at the age of the first galaxies. Studying HD1 and possibly other similar ancient objects with this telescope can help clarify some crucial questions about the early history of the universe and the growth of black holes and the first galaxies. (The Astrophysical Journal, 2022; Monthly Notices of Letters from the Royal Astronomical Society, 2022)