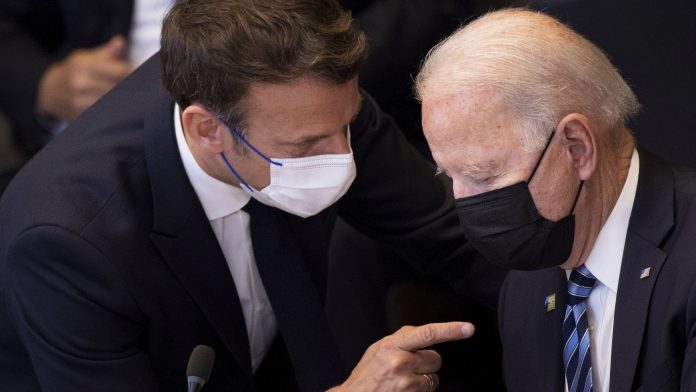 After the serious feud in the submarine dispute, US President Biden and French President Macron want to meet face-to-face in Europe in October. They agreed on a phone call Biden requested.

After diplomatic turmoil in a row over a submarine deal with Australia, US President Joe Biden and French President Emmanuel Macron agreed to meet in Europe in October. This stems from a joint communication between the two governments circulated by the White House. Macron also decided that the French ambassador would return to Washington next week.

Last week, without consulting his allies, Biden announced an Indo-Pacific security alliance under which Australia would be supplied with US-made nuclear-powered submarines. Great Britain is also involved in the arms deal.

Explosion of a billion dollar deal

The alliance sparked outrage among the government in Paris after breaking a billion-dollar deal to build 12 conventional diesel submarines for Australia. According to French diplomats, France was informed just hours before Biden announced Australia’s withdrawal from the contract with French arms company DCNS. In an unprecedented move, France then recalled its ambassadors to the United States and Australia for consultations. Biden finally asked Macron to call him to settle differences.

The joint statement said that the two presidents agreed to start a process of intensive consultations in order to build confidence and propose concrete steps to achieve common goals. The planned meeting is part of it.

In the announcement, Biden emphasized that French and European involvement in the Indo-Pacific was strategically important. The United States formally accepts that France and Europe play their part in the balance of power with China. The United States, it was said, “recognizes the need for Europe to make a positive contribution to transatlantic and global security through stronger and more efficient defense and thus complement the role of NATO.”

The joint declaration not only paves the way for de-escalation of the conflict, but also fuels the debate over European sovereignty. Macron wants to make Europe more independent of its ally the United States of America and will also advance this goal during France’s presidency of the Council of the European Union from January onwards.

Before the phone call, the French government’s palace, Elysee, said the Americans were expected to admit that their unilateral action had led to a “crisis of confidence” between the two allies.

This man wants to bring down the mighty Victor Urban