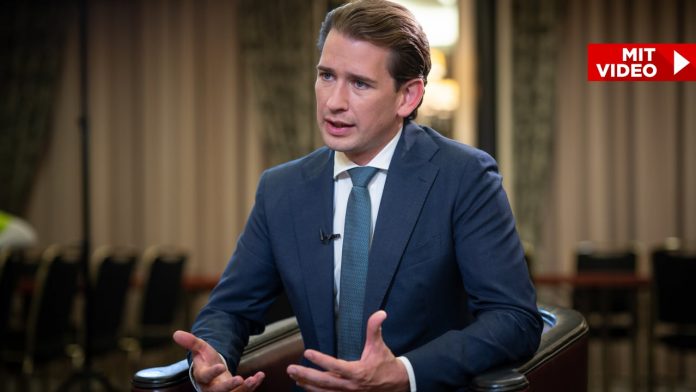 A stern declaration by Austrian Chancellor Sebastian Kurz (35 years old) on the issue of immigration: he does not want to allow refugees from Afghanistan to enter the country.

In an interview with BILD LIVE, BILD TV station, Kurtz saw pictures of refugees who initially fled to Iran wearing sandals over rugged rocks. Is he worried about another wave of refugees entering Europe – similar to 2015?

In short: “I think we still have many options to prevent 2015 from happening again.”

Because there are differences: At that time, unrestricted entry into Central Europe was announced in Europe. European money was used to move people around Europe so that they could choose the country in which they would apply for asylum. “Public transportation has been used to transport people from Greece to Germany or Sweden in a few days,” Kurz said in an interview with Bildlife.

and now? In short: “Today it is completely different. Investments were made in border protection; for example, there is a government in Greece that is intensively combating illegal immigration. There is a different situation in Turkey.”

Conclusion of the Austrian chancellor: “There are many things that cannot be compared to 2015, thank God! The signals from many European countries are also very different. “

However, the following applies: “We should always be alerted.”

Sebastian Kurz believes that local assistance is the best solution: “It is important that people in Afghanistan are cared for and supported through humanitarian efforts and that we provide assistance in neighboring countries.”

But he asserts: “What I might consider wrong is if the terrible situation in Afghanistan now leads to uncontrolled migration to Europe, where smugglers eventually make money, people are drowning in the Mediterranean, and we in Europe are in a situation we don’t live in. You want to experience once other”.

Again briefly in plain language: “What do we do? We depend on humanitarian aid on site, but we are not ready to voluntarily accept Afghans into Austria. We have already made it clear that we do not engage in such ideas of registration. We already have one of the largest Afghan communities, and this is challenging Too much to integrate. We will not receive additional people.”

Does Kurtz even want to continue deporting Afghans from Austria?

The obvious answer: Yes, Afghans are still being deported. As far as Kabul and Afghanistan airports are concerned directly, this is neither legally nor actually possible. But many of the people who applied for asylum with us are not from Afghanistan at all. They are Afghans from Iran, for example. We will, of course, deport them. Or it is Dublin cases that we have deported to Romania because Romania is responsible under the Dublin Regulations.”

“This is a rule of law process that is completely legitimate,” Kurz explains. I have always spoken out for people who cannot choose where to apply for asylum. When a person enters Greece or Romania, he does not have the right to say ‘I want to live in Austria’, but rather the status of protection, which he can then obtain in the country that first set foot on European soil.

The situation in Afghanistan frustrates the Austrian chancellor: “The outlook for the future is certainly bleak, but I hope that many countries will be able to alleviate the greater suffering.”

From Le Pen to Urban: The formation of a right-wing coalition...