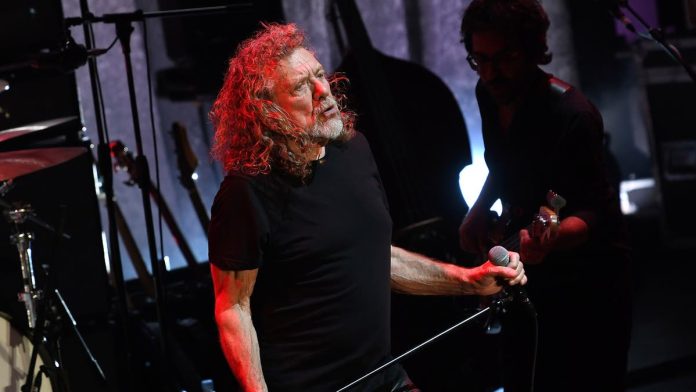 The then surprising success ended, but the asymmetric duo Robert Plant and Alison Krauss still get along wonderfully.

Led Zeppelin legend Robert Plant’s debut with American singer Alison Krause was a surprising success: “Raising Sand” (2007) won five Grammy Awards, including Best for Album of the Year and Record of the Year; The duo’s work has sold millions of copies. Cover versions of popular and lesser known songs, country songs, blues and rock sounded so inspiring that one could look forward to a continuation of the project by very different artists.

After 14 years it’s time. After aperitif solos “Can’t Let Go” in August and “High And Lonesome,” Brit Plant (73) and bluegrass specialist Krauss (50) debuted once again with the album-length “Raise The Roof,” how well their vocals rhyme: The loud fat muscle man sings to an ex-hard rock and pure soprano of an Illinois country icon.

With changing lead vocals, the two superstars throw themselves into the old songs of Bert Jansch, Merle Haggard, Allen Toussaint, or the Everly Brothers. There’s also the new composition “High And Lonesome” by Plant with studio producer T-Bone Burnett and “Quattro (Worlds Drift In)” by roots band Calexico – Krauss calls the discovery of this famous Latin folk poem “The moment you knew we were going to make an album else “.

The effect of surprise disappeared at that time, of course. So it remains to be seen if Raising the Roof can achieve a similar effect to its famous predecessor. Especially since Plant has been heading in completely different directions with gritty, unpredictable single albums and now looks a bit tame here. Blunt/Krause always does a good second time as you can hear the joy of singing together.

Who will win the battle of Morbius against Venom? Jared...