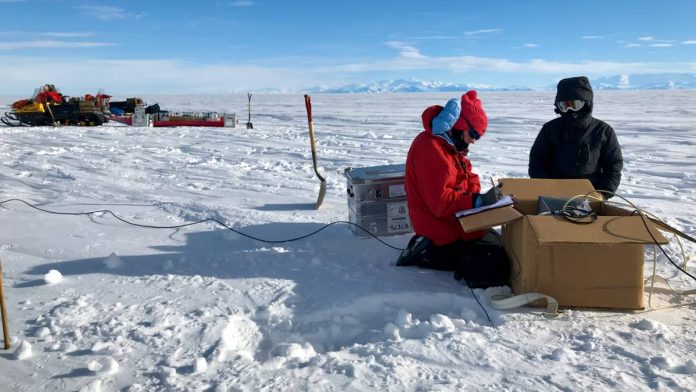 Researchers have identified a huge underground water reservoir near the Ross Ice Shelf in Antarctica. Liquid water is found in a sedimentary basin up to 1.3 km deep. If the sediment is removed, the height of the water column will be between 220 and 820 meters. The explorers hypothesize that water affects the speed of ice flow in Whillans and that there are other deep-water reservoirs in Antarctica. The study, led by the research group led by Chloe Gustafson of Columbia University in Palisades (New York, USA) was published in the journal Science.

“Others have hypothesized that there may be deep groundwater in these sediments, but no one has done detailed imaging yet,” Gustafson explained. She and her team used seismometers and the so-called passive seismic method to draw conclusions about the soil’s substructure by analyzing light seismic waves. They also used a technique previously used only in Antarctica to reveal structures ten kilometers or more deep: magnetology.

At this point you will find external content from Spotify Ltd.which completes the article. You can view it with one click.

Melt water could have seeped inside

Scientists are evaluating data on the electrical conductivity of structures underground. Natural magnetic fields release eddy electric currents into the Earth’s interior, which in turn generate magnetic fields that can then be recorded and analyzed. Using this technique, Gustafson and colleagues were able to determine the depth and extent of the sedimentary basin. Since salt water conducts electricity better than fresh water, they were also able to determine the salinity of the water: it is lower at the top of sediment than in seawater, but increases with depth.

Researchers explain this result as follows: thousands of years ago, the sedimentary basin was a sea floor, which is why the sediments were filled with salt water. For the researchers, a low salt content is an indication that the water reservoir is connected to meltwater on the glacier’s bottom, meaning that meltwater has seeped inward. The water on the bottom of the glacier reduces friction as the glacier moves over rocks or sediments. So the water affects the glacier’s flow rate and the amount of ice that ends up in the sea – which then contributes to sea level rise as a result of climate change.

Still not clear: How does groundwater affect the glacier?

In order to better understand the impact of groundwater on glacier behavior, these water reservoirs should be incorporated into the next generation of ice sheet models, the scientists recommend. They also recommend the use of the ferromagnetism-based measurement method, a measurement method based on electromagnetism: “I hope people will start to consider electromagnetism as part of the standard Antarctic geophysical toolkit,” said Gustafson, who is also a professor at the University of California San Diego in Los Angeles. Jolla works (California, USA).

In a scientific commentary, Winnie Chu of the Georgia Institute of Technology in Atlanta, Georgia, USA, noted that groundwater could also help the glacier flow more slowly: “If aquifers hold a large amount of subglacial water, then The amount of water lubrication that contributes to slip on hard ground will be reduced.” How groundwater actually affects glacier behavior remains to be researched.

Download the new RND app for Android and iOS here for free.