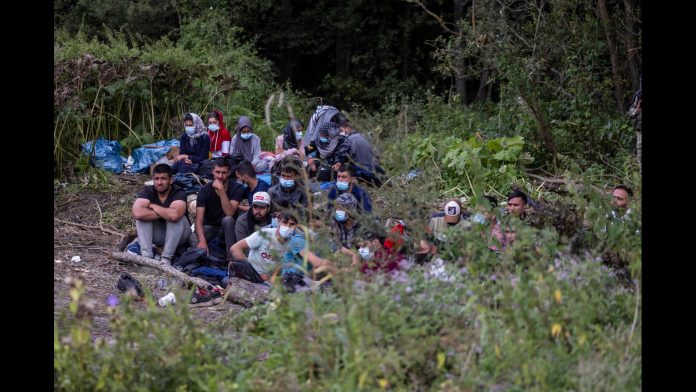 The refugee conflict between the European Union and Belarus is also felt in Poland. A group of refugees are stuck at the border for two weeks and cannot return or advance.

There is still a dead end on the border between Belarus and Poland. A group of Afghan refugees have been camping there in the open field near the village of Usnarz Gorny for about two weeks. Marcin Kossi, representative of the independent ombudsman elected by the Polish parliament, was there: “We managed to talk to people. There are currently 32 people in the camp, including five women, including a 15-year-old girl.”

People are in a serious psychological state. “They got bread from the Belarusian side. They get water to drink from a nearby river.”

Refugees are stuck between all fronts. Sometimes the term “no man’s land” was used in the Polish media – in fact, people are still in the territory of Belarus. An armed group of Polish border guards prevented them from proceeding.

Are you targeting the European Union?

Some time ago, in Poland and the Baltic states there were problems with immigrants from the Middle East, whom Belarusian President Alexander Lukashenko apparently smuggled into the territory of the European Union.

Polish Prime Minister Mateusz Morawiecki has been finding clear words on the issue for days: “Lukashenko is taking advantage of people. It is an attempt to provoke a major European immigration crisis. But Poland is now building a dam against these provocations and behaviour.” Lukashenko’s regime chose the wrong border because the Polish border was well protected. Border guards also maintain that they must also ultimately protect the external borders of the European Union.

That is why words are followed by deeds – the construction of a two-and-a-half-meter fence began on the 418-kilometer border with Belarus. “We are protecting our borders in the right way, but at the same time we know that these people need support from the other side,” Moraviki said. “That is why we have sent a truckload of relief items waiting at the border. We are counting on the Belarusian side to come to their senses.”

Belarus does not allow relief supplies to pass through

The truck the Prime Minister mentioned also has tents and blankets – because temperatures drop at the border in the late summer nights. But the Belarusian side does not allow the passage of extradition.

The conservative newspaper “Rzeczpospolita” wrote that no one should turn a blind eye to the danger of mass migration. However, the walls and barbed wire are symbols of slavery – which in Poland evoke bad memories of the past.

The left-liberal Gazeta Wyborcza reports on the malicious complacency and racist undertones of the government’s barbed wire and the next few meters of the border fence.

The next “stalemate” on the Polish border

EU aid to Belarus: “Citizens have a legitimate right to decide...