Home World Putin threatens to choke off gas: Where is the Nord Stream turbine? 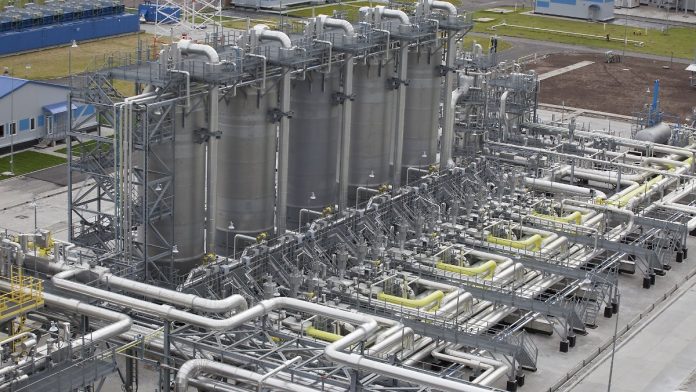 Putin threatens to choke off gas
Where is the Nord Stream turbine?

Maintenance work on the Nord Stream 1 pipeline is nearing completion. Russian President Vladimir Putin indicates that the gas will then flow to Germany again – albeit in reduced quantities. The Kremlin justifies this with the loss of turbines that were maintained in Canada.

In June, Russian energy giant Gazprom severely reduced gas supplies through the Baltic Sea pipeline, which is undergoing maintenance for a few days. Reason for delivery cut-off: turbines from Siemens Energy that were serviced in Canada are missing. The turbine should now be on its way to Russia. But where exactly is the turbine?

The destination of the turbine is the pressure plant in Portovaya, Russia. According to Gazprom, it is necessary to operate Nord Stream 1. The location is northwest of Saint Petersburg and about 20 kilometers from the Finnish border.

The turbine will be delivered to Russia via a stop in Germany. Because the sanctions imposed by the Canadian government prohibit the transfer of the device directly from Canada to Russia. The federal government argues that the delivery of turbines from Germany does not violate EU sanctions because they are not intended to transport gas.

The Federal Ministry of Economics does not provide any information about the location of the turbine, justifying this with safety issues and noting statements from manufacturer Siemens Energy that everything is being done to ensure that the turbine can be transported and used as quickly as possible. possible. When asked by ntv.de, the company did not want to comment on the whereabouts of the turbine. The owner of the turbine, Gazprom, could not be reached. According to the Russian government, neither the machine nor the documents associated with it arrived.

First to Finland, then to Russia

According to the Russian business newspaper Kommersant, the turbine arrived in Germany by plane last Sunday. Then it was transported by ship across the Baltic Sea to Finland. By road we continue through Helsinki to the Russian border. According to Kommersant, the turbine will arrive in Russia around next Sunday, depending on the duration of customs clearance. She added that the installation usually takes three or four days. The turbine can then be started.

No gas currently flowing through the pipeline due to maintenance work – it should be completed tomorrow Thursday. If Gazprom pumps gas to Germany again, the quantity should at most reach the level before maintenance work. Meanwhile, Russian President Vladimir Putin threatened that if Gazprom did not repair turbines in Canada in time, production capacity would fall even more.