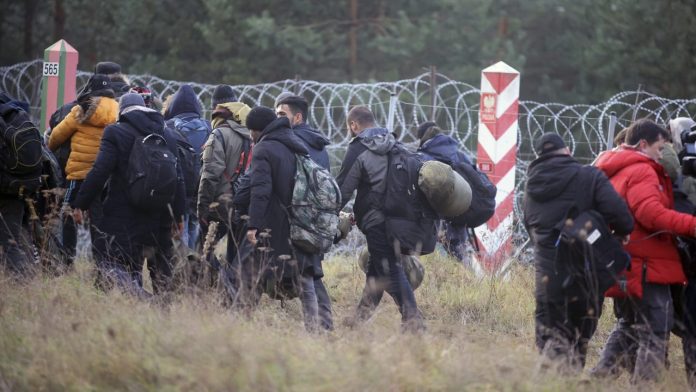 Horrific scenes on the edge of the European Union! In the border area between Belarus and Poland, thousands of migrants are still waiting on the Belarusian side, hoping to advance westward into the European Union.

They sleep in makeshift camps in the woods in temperatures around freezing point. Some groups made a violent attempt to cross the border on Saturday night. These are the images that the Belarusian dictator Alexander Lukashenko (67 years old) wished for!

Lukashenko lured immigrants from Syria and Iraq to Minsk, and abused the plight of the people in order to take revenge on the European Union for the imposed sanctions. The Federal Police is now cracking down on Lukashenko’s gangs of smugglers!

In the past 10 weeks, 329 smugglers were temporarily arrested by the federal police who brought migrants in pick-up trucks from the Polish border region to Germany. A large number of them are under arrest.

Among the perpetrators were 14 with a German passport, and some Syrians and Iraqis with the right to reside in Germany. Other smugglers come from Ukraine, Georgia and the Baltic states.

According to the findings of the investigators, smugglers proceed through closed online forums and rent a truck. The people behind them in Minsk send them geographic data on their mobile phones about the areas where they should receive migrants.

They receive between 1,000 and 5,000 euros per trip. So far, more than 9,500 immigrants have been registered who have come to Germany through Minsk.

Green leader Annalina Barbuk, 40, criticized the state of emergency in the border region. Barbock told Bild am Sonntag that emergency humanitarian aid is now the most urgent. Therefore, aid organizations must be allowed to enter the closed border area immediately. I appeal to the Polish government to make this possible and to accept offers of support from the European Union – as well as with regard to the protection of common borders.”