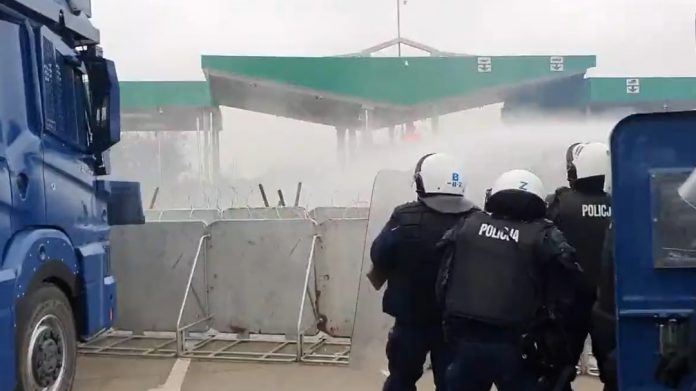 Minsk. The situation on the Belarus-Poland border escalated for thousands of migrants on Tuesday. Belarusian state media showed in various videos how the Polish side used water cannons against migrants at the Koznica-Proszy crossing.

You can see water-soaked people, including journalists, who were hit by a water jet. The Polish Ministry of Defense also released a video showing the use of water cannons.

The ministry in Warsaw spoke of an “attack by migrants” at the Koznica border crossing. On Tuesday, the ministry wrote in a short message service on Twitter that the refugees were very aggressive and were throwing stones at soldiers and security forces. They were also equipped with grenades from the Belarusian side.

Belarusian President Lukashenko said that he did not create an immigration route. © Reuters

Poland does not allow the media

The Belarusian footage also showed migrants throwing stones at Polish security forces. According to unconfirmed reports, the Polish side used tear gas. Poland does not allow the media to report from the border area.

According to Belarus Governor Alexander Lukashenko, more than 2,000 people have been in a “migrant camp” there for days. Children were also seen crying in the videos posted. Lukashenko announced after his phone call with Chancellor Angela Merkel that he expected another conversation with her. Lukashenko said talks are also on hold with Russian President Vladimir Putin, who has offered to mediate in the conflict.

Many immigrants from Iraq. According to Interfax, the country’s embassy in Moscow has reported that about 200 Belarusians now want to return to their homeland. She added that they include families, women and children. An “evacuation flight” will be organized from Minsk on Thursday.

See also  "Maderna" instead of "Moderna": the detection of a woman with a false vaccination certificate