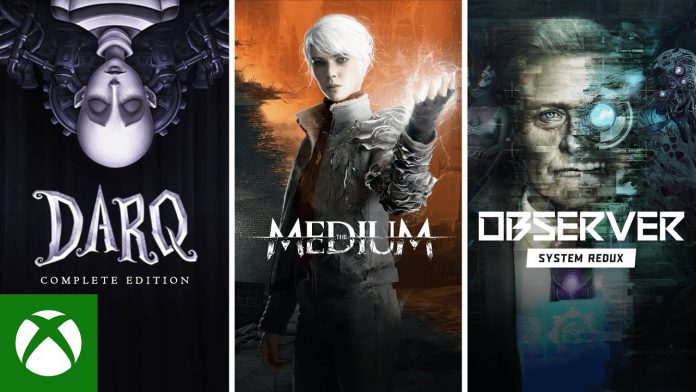 The Ultimate Horror Pack brings you three award-winning horror experiences with The Medium, Observer: System Redux and DARQ: Complete Edition, optimized for Xbox Series X/S and equipped with Smart Delivery. After purchasing the package, the games can be downloaded from the relevant page.

Uncover a dark secret that only a medium can solve. Travel to an ancient communist resort and use your unique media skills to uncover disturbing secrets, solve double-reality puzzles, survive evil spirits, and explore two worlds at the same time.

The Medium is a psychological horror game with patented dual reality gameplay and an original soundtrack by composers Arkadiusz Reikowski and Akira Yamaoka.

The year is 2084. Become a neurological detective in a cyberpunk world torn by epidemics and wars and penetrating the minds of others. Use any of your feelings, thoughts or memories to solve the case and catch the elusive killer.

The Observer: System Redux is the definitive vision of the award-winning cyberpunk film, re-released and expanded for the next generation.

DARQ tells the story of Lloyd, a boy who realizes he is dreaming. His dream soon turns into a nightmare from which he cannot escape. As he explores the darkest corners of his subconscious, Lloyd learns how to survive a nightmare by manipulating the laws of physics to his advantage, thus making the flowing fabric of his dream world his own.

DARQ: Complete Edition is the full version of the gravity curved horror puzzle game. Base game DARQ and DLC include “The Tower” and “The Crypt”.

Here is the trailer for the launch of the ultimate horror pack: