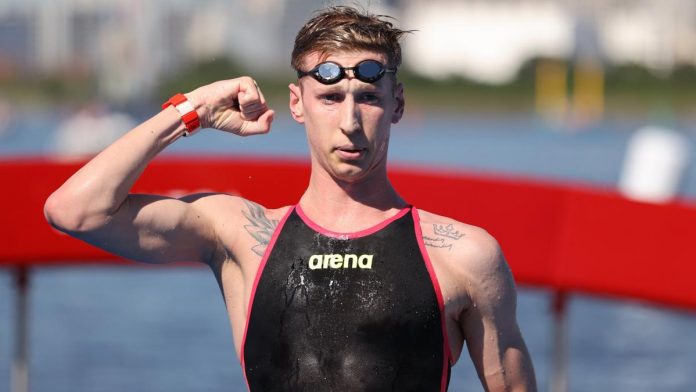 FifthOil-pumped and gasping for air, Florian Wellbrock sits on the blue carpet on the boardwalk at Odaiba Port. The sun strikes his face mercilessly, behind him is a rainbow bridge and the supervisor puts a white towel on his face. A few seconds earlier, after a grueling ten kilometers, he emerged from the warm waters of Tokyo Bay by nearly 30 degrees. Now he slowly gets up and extends his right arm to the sky in triumph: Olympic victory!

The 23-year-old is taking his third chance for a golden coup in Tokyo, and after finishing third and fourth in pool, he is crowned Olympic champion. More than that: He swam a gritty race from the start, shocked the competition with a quick start, showed no weakness, and took a clear lead in the final kilometer. When he hits after 1:48:33.7 hours, a world falls between him and the pursuers. The silver medal was won by Christoph Rasovsky (Hungary, 1:48:59.0), ahead of Gregorio Baltrinieri (Italy, 1:49:01.1). Elmshorn’s Rob Muffels was ranked 11th (1:53:03.3).

Willbrook’s victory is exceptional in many ways: the German had never before won an Olympic gold in open water. In 2012 in London, Thomas Lorz won his last Olympic medal to date with a silver. In addition, Willbrook was crowned the first German Olympic champion in swimming in 33 years. At that time, at the 1988 Olympics in Seoul, Michael Gross (200 m butterfly) and Uwe Daßler (400 m freestyle) were victorious in the pool.

“Florian has dominated the field from the start and is unstoppable. He created something historic with Germany’s first Olympic victory in open water,” says world record holder Paul Biedermann enthusiastically. “Winning a medal in the pool and in the open water is his own league and speaks to Florian’s exceptional talent Willbrook.”

Wellbrock shocked the competition at first

The competition day for athletes begins very early on Thursday morning. Because of the sweltering heat, organizers had already scheduled the open water triathlon at Odaiba Marine Park at 6:30 a.m. last year. And this morning is very intense: almost 30 degrees outside and the temperature of the water, not a single cloud in the sky, no wind, and the water is as smooth as a mirror. It was 6:20 a.m. when the protagonists took the stage. Rob Mavels with starting number 10 on his arm, shortly after fellow coach and good friend Florian Willbrook with the black twelve on his arm and a white towel over his head.

At 6.30 a.m., the starting shot penetrated the idyllic area of ​​Tokyo Bay. The fight begins in the water – with opponents, but also with circumstances. For comparison: the water temperature in sports pools for most public pools is around 24 degrees. Now the sun hits the water and heats it up even more. Team doctor Alexander Beck compared the conditions to the rigors of a walk across the desert.

So take it easy first, the race is long. At least that’s what national coach Bernd Berkhan had said the day before. But Wellbrock does the opposite. It was less than five meters from the ten kilometers when the 23-year-old took the lead on the field – and darted away with quiet, long-arm strokes. The competition seems to be baffling. With a blow to the arm with a blow to the arm he separates himself, putting several lengths between himself and the rest of the field.

After the first seven of his 1.43-kilometer laps, he grabs his beverage bottle with a clear lead at the supply station. Willbrook turns his back, drinks, and checks out the field. Quiet, not hectic. French Marc-Antoine Olivier takes less time, runs a few meters and is 6.4 seconds behind on the second lap, followed by Hungarian Christoph Rasovsky.

The chasers are getting closer

The field is divided into three parts, now. Wellbrock in front, then his chasers, and 21 seconds behind Wellbrock Muffels leading the rest of the swimmers. At the second and third stops at the refreshment station, the same picture as before: Wellbrock takes a little longer than Olivier, the Frenchman approaches – after 4.3 kilometers, the German is leading 1.6 seconds, Rasovszky is back 2.7 seconds. Behind them, Italian Gregorio Paltrinieri, Olympic 1,500m champion from Rio and second in the 800m from Tokyo, set himself up. The stalking field was torn, and the Mavell retreated.

In the back, however, the pace is made. Some want to prevent the three at the top from leveling medals among themselves. They swim to it, closing the gap in the range of a few meters. After the fifth lap, Willbrook is three seconds ahead of Rasovsky and Olivier, and Paltrinieri and Greek Athanasius Kinigakis are two seconds behind. It’s getting tighter at the top.

The last round. Wellbrock is still up front, pushing his arm by forcefully pulling his arm across the water. Paltrinieri in direct pursuit, five seconds behind. Then Rasovsky and Olivier (+7.4 seconds), followed by Israeli swimmer Matan Roditi. 1.43 kilometers to go to the Olympic victory.

However, twice already in Tokyo it looked as if Willbrook was swimming towards gold. In pool competitions last week, he pioneered the 800m on the final track – eventually finishing fourth, losing the bronze. And that’s despite the fact that the last train is actually a German force. In the 1500m, he also advanced to the 1450m – and ended up swimming in third place. Give up victory in the last few meters? He didn’t want to see that again.

And this time it works. Willbrook pulls away and pushes himself away from the competition. Put a meter by a meter between you and others. Nobody can continue anymore. “Florian swam today like he’s from another planet,” Paltrinieri says appreciatively later.