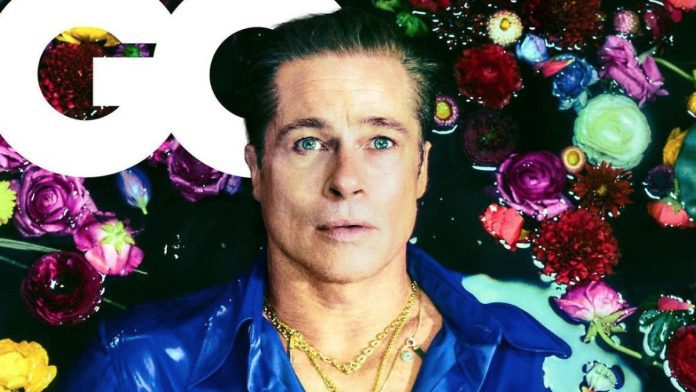 Like Ray Liotta in an open coffin.
‘GQ’ cover with Brad Pitt causes a stir

Brad Pitt doesn’t have to prove that he can slip into different roles. But the actor has now raised eyebrows with his new photo on the cover of GQ. On the Internet he is confused with Ray Liotta or Anthony Starr.

GQ’s photoshoot with Brad Pitt has caused some confusion on the internet. The new issue’s cover star is presented in a particularly artistic way – perhaps too artistic for some viewers.

On the cover, a Hollywood star in a bright blue suit is lying in the water decorated with flower heads, a small salamander crawls on his chest. Pete’s indifferent facial expression and the oddly twisted hand under his chest both annoy and worry some fans as well. On Instagram, many think Pete looks dead in the photo and ask in the comments if he’s okay.

But many also have other associations with the photo: “I seriously thought this was a Homelander,” one of the most popular comments. Homelander is a character from the comedy series The Boys, played by Anthony Starr. Others remember actor Ray Liotta, who died in May this year. “We had to look twice, I think it was Ray Liotta in an open coffin,” says one of the many similar comments.

Chameleon pattern in every photo

In other color photos by photo artist Elizaveta Borodina, Pitt can be seen in ’70s tryout clothes, wearing a shiny jacket, high heels or with rhinestones glued to his eyes. In this series of photos many mention David Bowie. In another, he’s swimming in the flower-filled pond, wearing purple shorts, a turquoise ruffled shirt and gold suspenders — outfits that recall many of Harry’s adventurous styles. In other photos, Pitt can be seen playing with fire in a knee-length man’s skirt and black eyeshadow.

The actor certainly didn’t have to prove that Brad Pitt could slip into different roles. In the also ambitious interview with writer Otesa Mechweg, he also mentioned his own artistic ambitions. Pete was quoted as saying, “I am one of those people who speak through art.” “I just always want to create something. If I don’t create anything, I somehow die.”