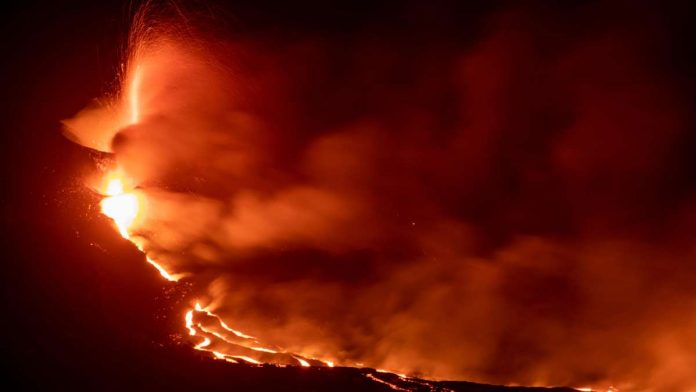 Even three weeks after the eruption, the volcano continues to rage in Cumbre Vieja on the island of La Palma. Part of the volcano collapsed. Large amounts of lava appear.

Update from Monday, October 11, 2021 at 8.25 a.m.: “Massive devastation” occurred on the Canary island of La Palma. That reports the Volcanic Institute of the Canary Islands “Involcan”. The volcano’s northern flank collapsed on Saturday (see first report from 10/10/2021).

As a result, new lava has been spewed out, with a temperature of up to 1,240 degrees Celsius, according to experts. On Sunday evening, the lava mass was said to have inundated an abandoned industrial area at a speed of 700 meters per hour. The recordings on Twitter show the power of nature:

Update from Sunday, 10.10.2021, 10.15 pm: The eruption of the Cumbre Vieja volcano keeps the Canary island of La Palma in suspense. According to the US station CNN, referring to the Spanish Institute of Geology, blocks of molten lava up to three stories high are rolling down a hill on the island. After the partial collapse of the cone of the Cumbre Vega volcano on Saturday (October 9, 2021), these clumps of material were released.

On Sunday (10.10.2021) there were also 21 seismic movements, the largest earthquake that day was 3.8. Since the first volcanic eruption on September 19, 2021, the eight lava flows have now destroyed 1,186 structures in La Palma, and the lava has swallowed 493 hectares of land so far. So far, more than 6,000 of the 83,000 inhabitants of the Canary island of La Palma have been brought to safety from the volcano.

The volcanic eruption in La Palma not only damages the infrastructure and tourism of the Canary Island. Banana cultivation was also severely affected. About half of the islanders live on it, either directly or indirectly. Added to this is the air traffic restriction – according to authorities’ estimates, air traffic may be disrupted again on Monday due to the ash cloud, and Tenerife airport may be affected as well.

First report from Sunday 10 October 2021 at 12.50 pm: La Palma – The Canary island of La Palma continues to suffer the dire consequences of the volcanic eruption. In mid-September, Cumbre Vieja erupted for the first time in 50 years. Since then, the Spanish island has been repeatedly shaken by earthquakes and entire regions devastated by newly emerging lava flows – and there is no end in sight yet.

After large amounts of lava had already emerged from the volcano, the north side of the volcanic cone in Cumbre Vieja collapsed, forming a new lava flow. The affected area has already been evacuated. The island recorded the strongest earthquake since the eruption of the volcano on October 7 with a magnitude of 4.1, according to Spain’s National Geological Institute. This created a side stream of lava that devastated many areas.

In addition, the volcano constantly spews ash and smoke. Ash clouds sometimes reach a height of three and a half kilometers. As a result, air traffic was suspended on October 7 until further notice – due to the layer of ash on the runways, the airport was “not operational,” airport operator Aina explained on Twitter. A bitter decision for the tourism sector, which has already suffered heavy losses since the volcanic eruption due to numerous cancellations.

But the island’s infrastructure and agriculture have also suffered greatly since the outbreak of Cumbre Vieja. The damage caused is currently estimated at around 400 million euros. Lava around 1150 destroyed its way to the sea. 6,000 people have had to leave their homes – but no one has been affected since the outbreak.

Pictures of a cat trapped in an empty pool of water have caused quite a stir online. There is lava around the pool. The animal welfare organization got involved and asked for help in providing the cat with food via a drone so it could be evacuated from the pool. (tt/tab)