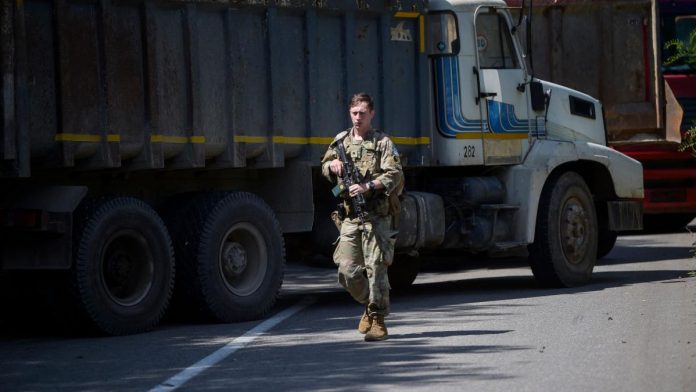 Because of the new entry rules, Serbian militants in Kosovo have blocked access roads to two border crossings. After the government of Kosovo postponed the new regulation, the situation is now starting to calm down.

MOn Monday morning, Serb Eleiyans began removing street barricades in northern Kosovo that they had erected the day before. This was reported by the Serbian state television RTS. By closing the roads to two border crossings into Serbia, Kosovo Serbs protested the new modalities of border control in Kosovo.

Accordingly, people who identify themselves at the border with Serbian identity documents are required to obtain an additional certificate issued by the Kosovo Border Police since Monday. Serbian license plates are no longer recognized either. Pristina sees this as a countermeasure to the fact that neighboring Serbia has not recognized the Kosovo documents for several years.

Tensions arose on Sunday over new border regulations in northern Kosovo, which is mostly inhabited by Serbs. Militant activists fortified the roads to Jarinje and Brnjak with heavy construction machinery. Kosovo police officers were shot. Police in Pristina said late Sunday evening that no one was injured.

The new border regulations will not be implemented at this time

International diplomats intervened on Monday night. Kosovar Prime Minister Albin Kurti then announced that implementation of the new regulation would be suspended for a month once Serb militants remove street barricades.

The government had condemned the “blocking of roads in northern Kosovo” and shootings by militants. Pristina blamed Belgrade for “aggressive actions” during the afternoon and evening.

Kosovo, which is now almost exclusively inhabited by Albanians, once belonged to Serbia. In 2008 it declared its independence. Serbia does not recognize the establishment of the state of Kosovo and claims its territory for itself. The German army has also been stationed in Kosovo since 1999 as part of the international mission.

Federal Defense Minister Christine Lambrecht noted with concern the tense situation at the border. “It is good that the government of Kosovo now reacts calmly and thus contributes to relaxation,” the politician from the Social Democratic Party said on Monday in Berlin. The Kosovo Force is also closely monitoring the situation and is ready to intervene if stability is threatened, as its mandate states. “The German military remains committed to NATO and KFOR in order to ensure a safe environment and freedom of movement for all people in Kosovo,” Lambrecht said.

The European Union called the parties to the conflict to a crisis meeting in Brussels on Monday. On Monday in Brussels, spokesman for the European Union’s foreign policy chief Josep Borrell said the aim was to provide advice on how to proceed and prevent such tensions from recurring.

The Bundestag Defense Committee will also deal with tensions between Kosovo and Serbia in its special session on Wednesday. “Before I allow myself to judge, I will let myself be informed in detail,” said committee chairwoman Marie Agnes Strack Zimmermann (FDP), the news portal Pioneers. “Therefore, I have put it on the agenda of the special session of the Defense Committee.” The committee meeting had been planned for some time.