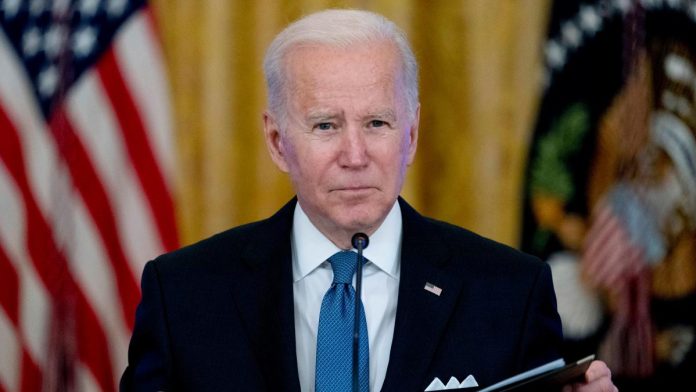 The press conference was about to end, but the microphone was still on: When a Fox News reporter asked the President of the United States about soaring inflation in the United States, Joe Biden became corny. The insult can be clearly heard in the recordings.

WLS President Joe Biden was caught horribly insulting a journalist because his microphone was still on. “What a stupid prick,” Biden said Monday at the White House via Fox News correspondent Peter Dossey, according to the recordings. The White House later included this statement in the official minutes of the press conference.

Doshi asked Biden at the end of a press conference for his way out of whether high inflation in the United States might hurt his Democratic Party in the November midterm elections. What a great plus, more inflation,” Biden said sarcastically in a low voice. “What a stupid prick.”

Biden used the expression “stupid son of a bitch.” “Son of a bitch” is considered a less serious insult in the United States than the literal German translation of “Hurensohn”. Biden’s comments were clearly heard in the recordings.

Doshi, who is a reporter for his station at the White House, was relieved by the president’s statement. “No one has checked it yet and said it’s not true,” he smiled to Fox News.

Dossey later said Biden called him. “Nothing personal, my friend,” said the US president.

Biden and the press

Biden and Dossey have clashed in the past. Recently the US President commented on a hand letter from the journalist at a press conference with the words: “You always ask me the most beautiful questions. None of them have much meaning to me. “

The conservative news anchor is known for providing highly critical reporting on Biden, and Ducey repeatedly highlights himself with persistent and provocative questions about the president. Fox News was also a longtime favorite of Biden’s predecessor Donald Trump.

On the other hand, Biden is known for the fact that he likes to express himself in slang and also makes frequent verbal interruptions. However, at the beginning of his tenure, he would walk around his staff to treat journalists with respect. He wanted to distinguish himself from Trump, who openly assaulted journalists.

See also  Not all people see it: optical illusion has a chilling effect