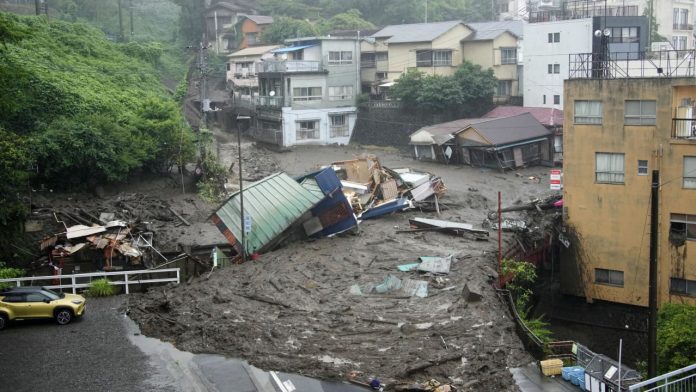 Atami – A landslide occurred in the Japanese port city of Atami on Saturday. At least two people died and about 20 others were missing. Before that, there had been heavy rain for several days.

Authorities in the central prefecture of Shizuoka said the mudslide destroyed 10 homes on Saturday and damaged at least 130 others. More than 2,800 families in the area were without electricity.

About 1,000 rescue workers, including members of the military, continued their search for the missing on Sunday (local time). But due to the constant light rain, they had to interrupt the operation in the morning.

Television footage showed how a collapse of mud and rubble buried several homes in Atami. “I heard a horrific noise and saw a mudslide coming down while rescue workers told people to evacuate,” the temple manager told public broadcaster NHK. He saved himself to a higher area. When he returned, the houses and cars in front of the temple had disappeared.

According to experts, the mudslide in Atami reached a speed of about 40 kilometers per hour. It stretched for two kilometers and slid off the coast. The dead were found near the port.

According to eyewitnesses, the muddy ground and sand slid down the slope several times. They tore down the electricity pylons and cars with them, the streets were mired in mud, and entire apartment buildings collapsed like paper houses. The authorities issued the highest alert level.

According to Japanese media reports, Prime Minister Yoshihide Suga will meet with ministers in the afternoon to discuss the disaster and other damages caused by the torrential rains.

Floods and landslides are common during the rainy season in Japan. Experts believe that climate change is exacerbating this phenomenon because a warmer atmosphere stores more water, which in turn leads to more precipitation.

As the soil softened, authorities also warned of more landslides and floods in other areas, especially as more rain was expected in the next few days.

Atami Resort is located about one hundred kilometers southwest of Tokyo. Due to heavy rainfall, train traffic in the area has been partially suspended. This also affected the Shinkansen high-speed train, which was temporarily unable to run on the route between Tokyo and Osaka.

See also  The conflict in Ukraine: The Pentagon fears a Russian attack