Home World Inferno on a Greek island: Euboeas save villages from fire 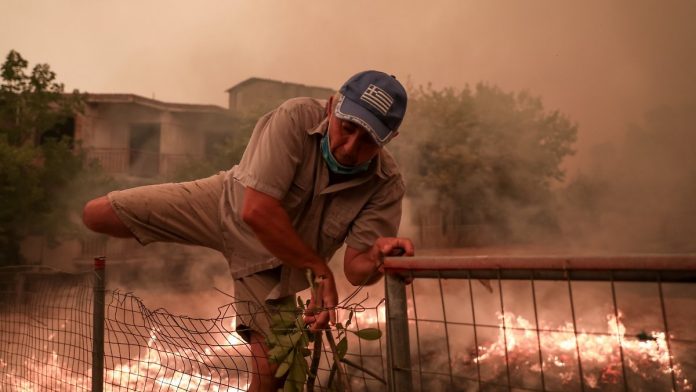 Hell on a Greek Island

Evia people save villages from fire

Devastating forest fires rage on the Greek island of Evia. The residents themselves defended their property against the fires. They feel abandoned by the government.

In a massive effort, residents of the Greek island of Evia, along with firefighters and volunteers, rescued several villages from the flames on Monday night. Kathimerini reports that although houses have been burned on the outskirts of cities such as Artemisio, Jouves and Pefque, town centers are still intact. However, many villages are still surrounded by flames.

Although the wall of fire had already moved towards the villages on Sunday afternoon, residents in some areas had little or no air support. The head of the Greek Civil Defense Nikos Chardalia justified this in the evening by the poor conditions – the development of extremely thick smoke limited visibility to the point that some operations were impossible.

Islanders have been highly critical of the lack of support: “I don’t really have a voice, so I’ve often asked for additional planes to fight fires. I can’t stand this situation any longer,” Mantodi mayor Giorgos Tsaborniotis told Sky TV. Tsaporniotis reported that many villages survived the fire so far because the residents remained despite the evacuation order and kept the fire under control with a garden hose.

“The state is absent,” said Janis Slimes from Jouf. “If people leave, the villages will burn. We are alone in God’s hands.”

On Monday morning, satellite imagery in the north of the island showed slightly fewer fire sources than on Sunday – possibly because most of the forest has now burned and the flames can no longer find food, Sky TV reported. So far, there have been various statements about the extent of the damage, the only agreement being that it is enormous. Several Greek media reported that the area of ​​50,000 hectares.

The weather will make the situation even more difficult in the coming days: from Monday onwards, a new heat wave will begin in southern Europe, with temperatures in many places rising above 40 degrees. Heat waves will also be a topic at the Intergovernmental Panel on Climate Change (IPCC), which will present its new report on the state of knowledge about global warming on Monday. He wants to dispel any last doubts about humans’ responsibility for climate change.

The report, prepared by 234 international experts, addresses, among other things, the risks of extreme events such as recent heat waves in Greece and Turkey and floods in Germany.

Thousands of soldiers in Donbas: Who is provoking eastern Ukraine?