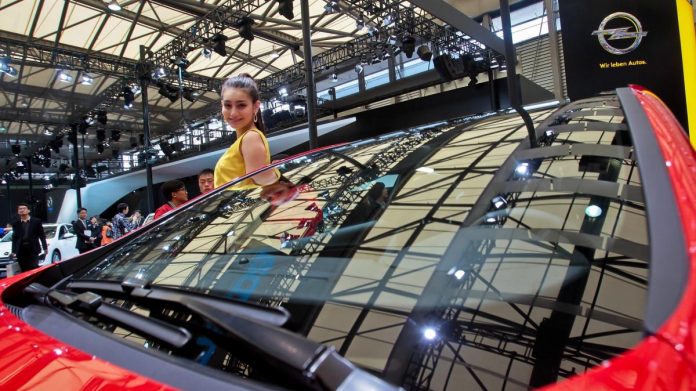 The economy has recovered from the Corona epidemic like any other country in the world. Auto sales are based on previous growth and development is not over yet.

When the Shanghai Auto Show opens on Monday, in China The corona crisis was almost forgotten. At least economically. The Chinese economy has largely overcome this and is already growing again at a record rate: As the Beijing Bureau of Statistics announced Friday, the world’s second largest economy grew by 18.3 percent in the first three months compared to the first quarter of the previous year. It’s the biggest jump since the quarterly evaluation started well 30 years ago.

The Chinese government has pursued a “zero-covid strategy” in the world’s most populous country. The strict lockdown and strict entry controls meant that – apart from smaller local outbreaks – very few cases of Corona had occurred for a good year. Since then, the economy has been on a recovery path.

The International Monetary Fund (IMF) estimates that China may gain another 8.1 percent in 2021

Overall, the “stable recovery” continued in the first quarter, the Chinese National Statistics Office said. The authority, warning of uncertainty and potential instability, continued: “We have to realize, however, that the COVID-19 pandemic is still spreading around the world.”

The International Monetary Fund (IMF) estimates that the Chinese economy could grow another 8.1 percent this year. The Chinese government was more cautious and set its official growth target at the People’s Congress, which just ended in Beijing, at a value of “more than six percent”.

China is giving impetus to the global economy

Strong foreign trade, in particular, has recently driven the Chinese economy. China’s factories have been in full swing to export medical goods such as corona tests and face masks around the world. Laptops and other home office equipment often come from China. Industrial production rose 24.5 percent in the first quarter. Domestic consumption also developed well in the first three months. As in the 2008 financial crisis, China is helping to boost the global economy. German automakers and several other companies operating in the Chinese market have recently managed to look to make huge profits there.

As Paul Berenberg-Gossler of the Department of Economic Policy at the German Institute for Economic Research (DIW) explained in an interview with our editorial team, recent quarterly numbers naturally look unusually strong compared to the same quarter of the previous year, but are mainly due to the statistical impact of a period. Comparison. While the effects of the Corona crisis in Europe were not felt until later, there was an almost complete stalemate in China in the first quarter of 2020. At that time, economic growth collapsed at a whopping 9.7% compared to the previous quarter. Compared to the fourth quarter of 2020, the Chinese economy grew by a more modest 0.6 percent in the current first quarter of 2021. “

But where does this growth come from in his view? “Especially at the beginning of the Corona crisis in the Western world, China has benefited greatly from external demand for data-processing equipment, medical protective clothing and various medical products. Therefore, China’s economy – especially industry – has been in full swing since the second quarter of 2020. “According to the scientist, this effect is likely to diminish in the long term.

But the auto market is booming. This is proven by Ferdinand Dudenhofer’s latest study on the Shanghai Auto Show, which our editorial team has received. “China is pushing everyone away,” wrote the head of the Automotive Research Center. “The economic growth is tremendous, and you can feel it especially in the auto market,” explains Dudenhöffer.

“The world’s largest auto market is on track to widen the gap to the rest of the world dramatically in 2021.” In the first three months of this year, auto sales in China rose by a whopping 76 percent compared to the same period the previous year, reports Dudenhöffer. The increase is largely due to Corona shutting down a year ago, but Dudenhöffer expects further growth in sales. It forecast sales of 24.7 million cars in China for the whole year.

The reason for the hope for growth is that the Chinese auto market is the largest in the world, but it is far from saturated. At the beginning of 2021, 287 million vehicles were traveling on Chinese roads. “With 1,400 million people, this corresponds to a combined density of 205 vehicles per 1,000 residents,” says Dudenhofer. For comparison: In the USA, the density of vehicles is 871 cars per 1,000 residents. So China still has great growth potential.

Among the premium manufacturers, Mercedes particularly benefits from this, followed by BMW, followed by Audi and Tesla. In the first quarter of this year, Mercedes sold 222,500 new cars in China. Tesla only comes in about a third – but it’s catching up. There are also many Chinese manufacturers who will play a major role in the Shanghai Auto Show. Companies like Geely with its brand ZEEKR, Great Wall Motor or Start-up XPeng are little known in Europe, but local manufacturers are gaining ground in China. In addition to Tesla, Chinese brands themselves are striving to reach the premium segment, according to a Dudenhöffer report. “For example, the Hongqi brand, as a premium subsidiary of the Chinese FAW Group, overtook Volvo in the first quarter,” says the expert.

The result is that for a long time there is no way to beat China to German manufacturers: “The Shanghai Auto Show demonstrates the power of the Middle Kingdom: self-confident Chinese auto makers who boast of high-tech, self-confidence. A nation that runs at high speed and unparalleled dynamism is pushing tech issues to Forward, “says the auto specialist.

Dudenhöffer warns that “it is important to have a reasonable exchange with China.” “Isolating yourself and believing you can change the world with penalties is wrong.” (With dpa)

You can also read about this:

We want to know your opinion: So Augsburger Allgemeine is working with Civey Opinion Research Institute. Read here what the representative surveys are about and why you should register.