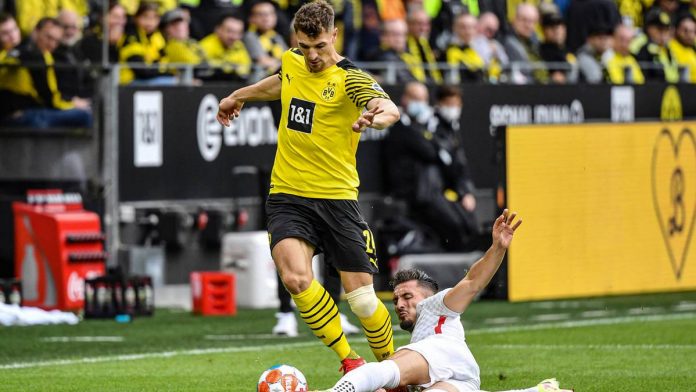 If it is Thursday (8.45 pm /daznIn the semi-finals of the Nations League Belgium and France in Turin, Thomas Meunier of Borussia Dortmund will not be part of the match. As announced by the Belgian Federation on Monday evening, the full-back left the headquarters of the Red Devils team prematurely. The 30-year-old, who recently put in a solid performance in a BVB dress, was replaced on Sunday in Dortmund’s 2-1 win over FC Augsburg.

Bundesliga coach Marco Rose said after the match that Meunier had two injuries: “In two or three matches, Thomas had an open wound on his knee and you have to be careful not to get infected. It will come at some point,” the BVB coach said. “He also has a big toe that we had to manipulate over and over during the week.” The two injuries have now prevented the spread of the national team, which is fighting alongside France for the Nations League title with European champions Italy and Spain (they meet on Wednesday in the first semi-final).

Dortmund must take a break from the winger due to the pressures of the past few weeks. BVB “only” offers nine domestic players during this international break. Manuel Akanji (Switzerland), Rafael Guerrero (Portugal), Thorgan Hazard, Axel Witsel (Belgium), Ansgar Knauf (U20), Doniel Malin (Netherlands), Josova Mukoko (U21), Marin Pongracic (Croatia) and Marco Reus (Germany) on an international flight. In addition to Meunier, Erling Haaland (Norway) was actually on the road with his team – but the BVB star came out. The same goes for Mahmoud Daoud (Germany) and Giovanni Reina (USA), who were injured a little longer and were on the international stage at least in the last international match. Judd Bellingham is taking a break from England coach Gareth Southgate. Mats Hummels must first improve his fitness before returning to the DFB team.